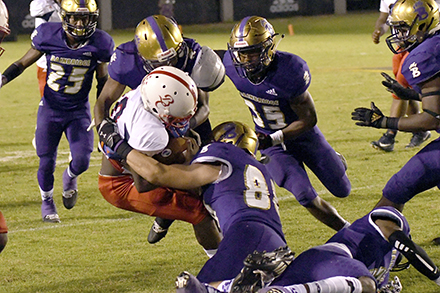 A swarm of Bainbridge defenders swoop in to stop a Brooks County running back from slipping away. Bainbridge will need to continue making explosive plays on defense to beat Class AAAAAAA Tift County.

Bainbridge visits its second of three straight road games this week at Tift County, a team the Bearcats had the lead on last year but let the win slip away.

At that time, the Bearcats were 2-3 before their game against the Blue Devils and coming off a shutout loss at home to Crisp County. They struggled with their youth in key areas and general inexperience, letting Tift County regain the lead in the second half.

This year is a different story. Bainbridge is 5-0. Even better, coach Jeff Littleton believes his team is ahead of schedule, compared to the level the Bearcats were playing at this time last season.

“I feel really good about where we are at this time of the year,” said Littleton. “I feel like we are ahead of schedule going into the sixth week of the season. We are doing some really good things on both sides of the ball, offense and defense, as well as special teams. But there is a lot of room for improvements. We are still making a lot of mistakes, which is to be expected, but we are farther along than we were last year at this time.”

Bainbridge beat Crisp County 14-9 last week in Cordele. The Cougars attempted a final drive at the end of the game to take the lead and the win, but Bainbridge’s defense came in clutch with big sacks that were constantly pushing Crisp County farther back into its own territory, finally ending with a strip sack from Tahari Tate.

Littleton wants to see more of those plays Friday against the Blue Devils (1-7A).

“We have to win the turnover battle and have more explosive plays than them, including on the defensive side of the ball with sacks and tackles for losses,” said Littleton. “We really emphasize that on defense.”

The philosophy is similar on offense: explosive plays and protect the football.

Tift County has size to their advantage, Littleton said, which will make the mission all the more challenging. The Blue Devils average 280 pounds across both the offensive and defensive lines.

Senior quarterback Joe Almond (2) leads the Blue Devils in passing with 21 completions, 195 yards, no touchdowns and four interceptions. The rushing game seems to be the bigger focus. Seniors Wade Jackson (1) and Jeffery Butler (23) account for more than 500 yards and two touchdowns for the Blue Devils. Junior tailback Chrishon Stephens (12) leads the team in touchdowns with three.

Linebacker J.D. Bengston leads the team in tackles with 29 solo and 20 assists.

Bainbridge kicks off against the Blue Devils at 7:30 p.m. at Tift County High School in Tifton.