Stronger with each other 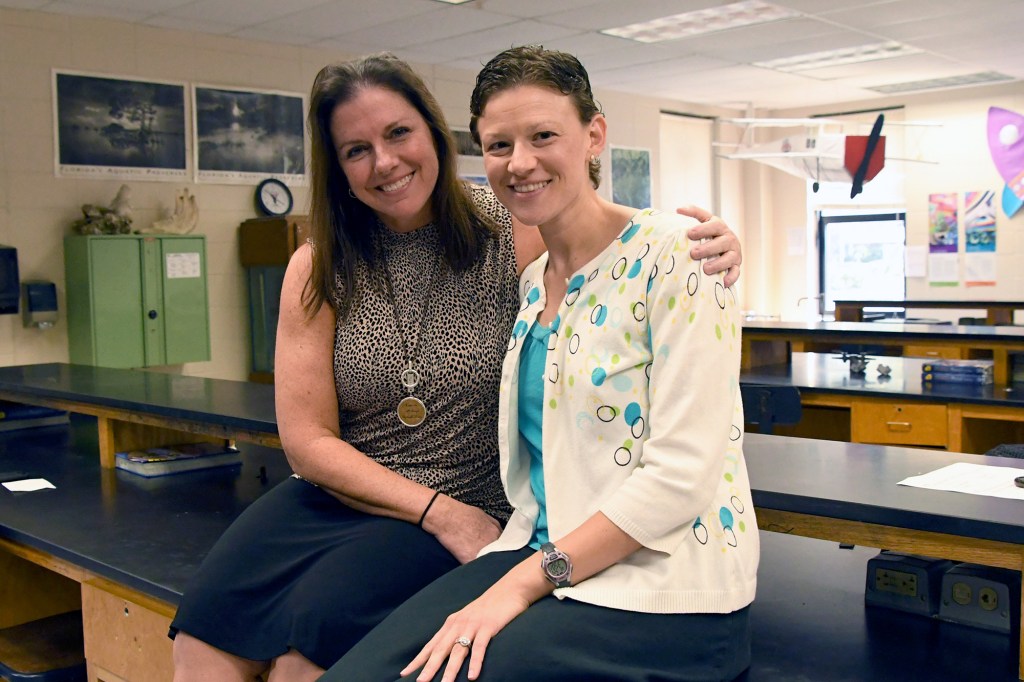 Libby Wheeler (left) and Michelle Hufstetler smile together in a classroom and Bainbridge Middle School. The two were diagnosed with breast cancer two months apart from each other.

For those who know Libby Wheeler and Michelle Hufstetler, it’s clear the two women are extraordinarily close.

After all, both are science teachers at Bainbridge Middle School. They have known each other for years, going all the way back to when Michelle was a student teacher. Today, they teach together on the same hall. Their classrooms are just a few doors apart.

Libby was diagnosed with breast cancer on June 15, 2018. Exactly two months later, Michelle was also diagnosed with the disease.
Yet despite the hardships, low points and struggles through treatments, Libby and Michelle look at each other and smile.

No, neither Libby nor Michelle were the only ones, because they had each other.

Libby found a lump in her breast just a few days after receiving a breast exam last summer. She immediately gave her doctor a call. Something had been missed. A month later, she received double mastectomy surgery. For the first time in her 27 years of teaching, Libby would miss the first few weeks of the school year while she recovered.

A group formed to deliver meals to the Wheeler’s home throughout those few weeks. One night Michelle delivered supper, and she had something to tell Libby.

She found a lump.

“I was actually still breastfeeding my 1-year-old at the time and I noticed a lump,” said Michelle. “I just thought it had to do with breastfeeding. It didn’t go away. That’s when I made the appointment with the doctor.”

Michelle’s cancer was what is called triple positive, one of the most aggressive forms of the disease. Treatment would require six sessions of intense chemotherapy, followed by a double mastectomy. Michelle intended to work through the chemotherapy that fall, but quickly realized it was too big of a risk when she was hospitalized from contracting the flu virus due to her weakened immune system. Michelle took a leave of absence and finished chemo treatments the day after Christmas. She received her double mastectomy in January.

Fortunately, Libby’s breast cancer did not require chemotherapy. For her, one of the best treatments was the companionship she had with her friends and loved ones.

“I know when I went to Tallahassee Memorial Hospital, they were offering me all these opportunities for breast cancer support groups, which I didn’t need,” said Libby. “I politely declined. It’s a beautiful thing. Because I have (Michelle), and two other girls who went to high school with me, and they also within the same year as me and her had both been diagnosed and both had double mastectomies.”

The four have a group chat where they can vent and laugh. Just talking to others going through the same events makes the process more bearable.

As if battling breast cancer wasn’t difficult enough, a natural disaster struck in October 2018, right in the middle of both Libby’s and Michelle’s treatments. Hurricane Michael was a Category 3 hurricane by the time is churned through Bainbridge. It knocked a tree right through the roof of the Hufstetler’s home. Michelle, her husband, and her two children moved in with her parents. Looking back, Michelle realized she couldn’t have made it without them, especially during periods where she couldn’t even get out of bed because of chemo. When Michelle could hardly lift a coffee cup from double mastectomy surgery, much less pick up her own child, her parents were able to come to the rescue.

Libby’s two children and husband were also blessings during her treatment. Unlike Michelle, her mom had passed away and her dad was sick, so help from her parents wasn’t possible. But Jackson, 16, and Russell, 21, could take care of themselves while also taking care of their mother

“We are both blessed with our families in those ways,” said Libby.

Libby made it back to school after missing the first five weeks to resume her duties as a science teacher at BMS. She met her students for the first time and completed a great year with them. Michelle, who had started school and left for a majority of the year, returned in the spring. Both were showered with love and support from their students, the school faculty and staff.

Michelle still receives treatment. Blood work and chemotherapy (a milder form than what she had originally been through) every three weeks, a shot every four weeks, and pills every day.

“I am going to continue those for the next 10 years,” said Michelle.

“You have it, but you have to be diligent forever after that,” said Libby. “It can come back. A double mastectomy is less likely to come back, but a lot of people believe if you have that you will never get it again. That’s not true. So you have to stay on top of making sure you are paying attention to your body and going to your doctor.”

Both women urge others to get checkups. If you are over 40, have a mammogram every year. Know your body, and when something doesn’t feel right, make a phone call. It could save your life.

“You will know your own lumps and bumps, and if they change, make sure you say something,” said Libby.
Story by Powell Cobb.

Open house for new voting equipment to be held…