Rotary gets update on United Way 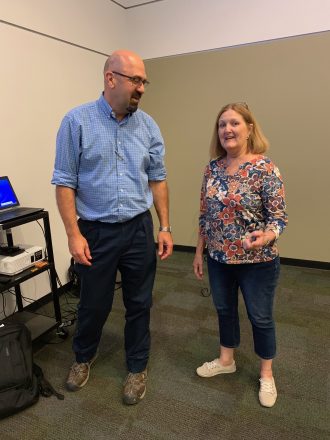 United Way Chairman, Shahene Neshat speaks briefly with Rotarian Threasa Hall, who is also a member of the Decatur County UW board.

Shahene Neshat, Plant manager at BASF in Attapulgus, has served with the Decatur County United Way Board four years, and has chaired the group for three years.

He spoke to the Rotary Club this week about how United Way was initially formed, then detailed how they serve locally.

He explained that in the 1800s many persons were rushing to the West in search of gold and there was little in the way of helpful resources. Five community leaders in Denver started an organization to try to help those who were in need of basic living conditions. They raised an amazing $21,700, equal to a half million by today’s standards.

It has now become the world’s largest non-profit organization, having a presence in 41 countries with a worth close to $5 billion dollars.

The goal is to advance the common good in three categories: Education, Income and Health.

Neshat was more specific when he spoke of going into action the day after Hurricane Michael struck the area. He got on the phone to the organization headquarters and when asked how they could help, he told them he had 175 employees without power. He needed 175 generators, chain saws and a gas truck. “That night help rolled in. I never saw a company step up like they did,” he exclaimed.

Neshat stressed that they are not yet done serving those affected by the last year storm. They are currently replacing a roof for some folks without the ability to handle it. “There are still folks who are hurting and need our help,” he added.

Each year they perform A Day of Action, when they reach out to some of the agencies they help support. Last year the volunteers went and cleaned up downed trees, etc., around the YMCA.

The next Day of Action is set to be held in either April or May.

The United Way Campaign is going on now and Neshat urged those companies to set up a workplace campaign for payroll deduction plan, if they don’t already have one.