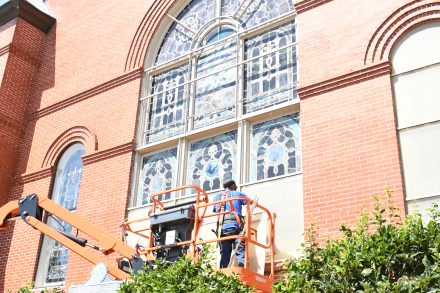 Renovations to preserve the stain glass windows at First Methodist are underway, despite the brutal heat.

Bainbridge First United Methodist Church, located on the corner of West Shotwell and Florida Streets, is having extensive work done on the exterior of their stained glass windows.

The process involves use of a very tall crane to remove all the old plastic covering that has become discolored over the years, and replacing it with a new coating material that will further protect the exterior of the windows from dirt and deterioration. Willet Howser Studios, a company from Indiana that specializes in stained glass restoration is doing the work.

Work has been ongoing for several weeks and is expected to be complete within the next ten business days.

This is the second time the church has gone through this process, in a building that is over 110 years old. The sanctuary was finished around 1908, as the cornerstone states.

According to the church building supervisor Jim Rentz, the building still has the original roof and the stained glass windows are the original ones. “What we’re doing is some years ago prior to 1986, when we moved to town, the church did a project to put clear covers over the windows to protect and preserve them. Over time it turns yellow. This project basically removes the old window coverings, rehabilitates the windows and reinstalls an acrylic film that gets them in shape for the next 40 years.”

He added that the church members have been very supportive of the project and raised the money for it internally without borrowing. “We’ve been trying to get this done for ten years. We finally got everybody together and agreed to go for it.”

Bearcats taken down to wire against Brooks County, prevail…