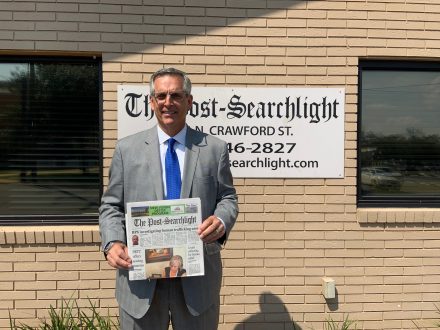 Georgia Secretary of State Brad Raffensperger holds last Saturday’s edition of The Post-Searchlight during his visit to Bainbridge on Monday.

Georgia Secretary of State Brad Raffensperger visited Bainbridge on Monday morning to discuss the new voting machines that Bainbridge will use as part of a pilot program for the general municipal election.

The new voting machines were designed by Dominion Voting Systems and are set to roll out in six counties across Georgia this year, with Decatur County being one of them.

Decatur County was chosen as part of the pilot program due to the accomplishments of Chief Elections Official, Carol Heard.

“She (Heard) was State Election Official of the year, and she really wants a great shop, so we picked here to be one of the six counties,” Raffensperger said. “She does a great job and when you’re bringing in something new, you want your A Team to be a part of that process.”

The new voting machines will be similar, but different than what voters are used to.

The changes will be seen immediately when voters enter their polling location.

Voters will give the polling attendant their license, which will be swiped in at the poll pad and upon verifying their eligibility status, will receive a smartcard to begin the voting process.

“It’s faster and more efficient,” Raffensperger said. “It will reduce lines on the front end and only take about 25-35 seconds to check in.”

Following their check in, voters will go to a touch screen polling system, much like what they are accustomed to. They will make their selections for their candidate of choice and press a button that then prints a paper ballot for voters to confirm their selections.

After reviewing their selections, voters will submit their votes into an imagecast precinct polling place scanner that drops the ballot into a secure lock box. The scanner uses special paper that ensures there can be no duplications, but by having a paper copy it also allows for easier access to physical recounts and post-election audits.

“We haven’t been able to do physical recounts since 2002,” Raffensperger emphasized. “It brings that confidence so people can’t say ‘hey I don’t think you got that right.’”

With these new additions, polling attendants will undergo a lot of training. Raffensperger said Heard and her team should have the new machines within a week to begin training, and then everyone should have this machine for the presidential primaries.

In the meantime, they hope to present the new machines at Chamber meetings or other locations to explain them to voters and train them as best they can.

Raffensperger said their biggest concern is voters leaving with their printed copy, believing they have already voted. However, they are confident that with the right amount of training voters will understand they must scan the paper for their vote to be eligible.

“It’s not a receipt, it’s your ballot and you must scan it,” he said.

The scanning process also emphasizes that everyone is accounted for.

The new voting machines have been in the works since the 2017 General Assembly meeting, and are a result of aging technology. The machines voters are currently using were installed in 2002, and have not been updated since.

Raffensperger is excited for voters to have this opportunity and use this new technology, especially with the new security it will offer to safeguard ballots.

“It’s just really exciting,” he finished. “It was time for change.”

Art Across the Ages exhibit opens this Saturday