Bearcats getting better by the week, are preparing for visit from Trojans 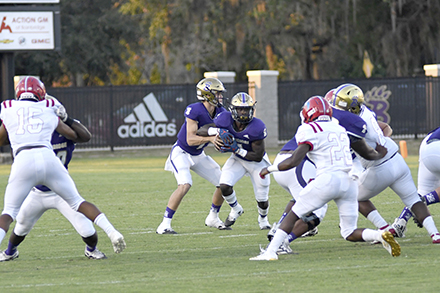 Last season’s game against Brooks County was a cold punch to the gut for the Bainbridge Bearcats football teams.

A 15-13 loss, Bainbridge gave up explosive plays on defense and couldn’t get its engine going offense. The Bearcats also turned the ball over four times. That’s the last thing coach Jeff Littleton wants to see his team do. So far this season, Bainbridge has only had one turnover. But it will need zero against the Trojans this Friday at Centennial Field.

Penalties are another area Littleton is concerned with, costing the Bearcats yards that will be needed to beat teams coming up on the schedule.

“We are making too many mistakes in certain areas,” said Littleton. “We are having a lot of penalties in games. It’s kind of a double-edged sword. I am seeing progress, and I’m pleased with the progress, but I am not pleased with some other things. We got to clean that up to beat good football teams like Brooks County.”

The Bearcats are starting to gel in other areas though. With a majority of its skill players back on offense, Bainbridge has enjoyed scoring 98 points across its first three games this season. Quarterback Quayde Hawkins leads Region 1-AAAAA in passing with a .625 completion percentage, 591 yards and five touchdowns under his belt. Running back Rashad Broadnax is second in the region in rushing with 302 yards and 6 touchdowns. Michael Ryan and Braxton Johnson sit among the top five in individual receiving yards.

“We still have some work to do in every facet of the game, but we are improving,” said Littleton. “I feel like we have not peaked, and that’s a good thing. We are playing good football, but we still have a long way to go.”

It certainly doesn’t get easier when Brooks County comes to Centennial Field this Friday. The Trojans are 1-1 and won their season opener on the road against Mitchell County 63-50.

Quarterback Ni’tavion Burrus is good at scrambling and turning a blown-up play into a positive. He’s thrown for two touchdowns this season. The Trojans leading rusher, Devin Edwards, has accounted for five touchdowns and 143 yards through two games.

“Protect the football. Play disciplined football. Take it away from them,” he said.

The Bearcats kick off against Brooks County this Friday at 7:30 p.m. at Centennial Field.