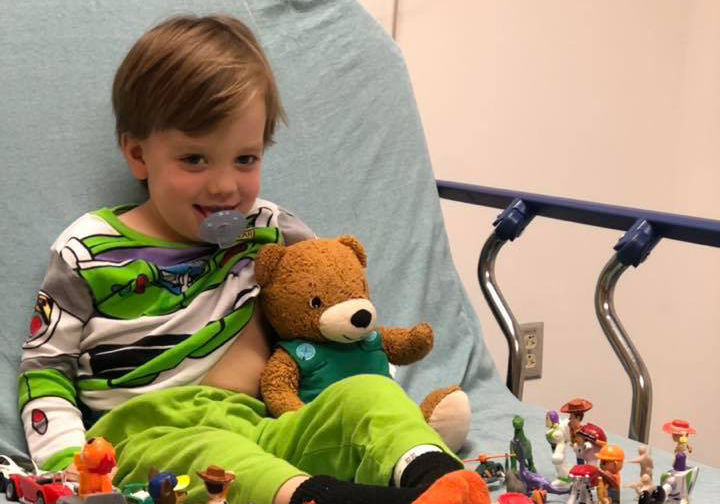 He loved all things Toy Story, but especially Buzz Lightyear. He could be seen in his mom, Sloane’s videos running around as Buzz, until recently, when he slowed down.

Unbeknownst to them, Cloud was fighting off a rare genetic disorder.

“He was a completely normal kid the first three years of his life,” dad, Carlyle said. “He loved to be outside and run around and play. He developed normally and met all of his milestones.”

Cloud was taken to the Children’s Hospital of Atlanta on July 11, after his slowing down reached the point of not being able to walk without assistance. CHOA performed an MRI of Cloud’s brain and spine and conducted extensive testing. He was then diagnosed with Guillain- Barre Syndrome and sent home.

Upon returning home, Cloud’s conditions continued to deteriorate at an alarming rate. The Head of Neurological Unit at CHOA asked the family to return to meet with him and a Pediatric Specialist on July 25. The family waited for more than two weeks for news.

On August 9, Cloud received news that changed his and his family’s life forever. He was diagnosed with late on-set Krabbe Disease.

Krabbe Disease is a genetic disorder that affects the central and peripheral nervous systems. Those who suffer from Krabbe Disease have a deficiency of an important enzyme called Galactosylceramidase. The disease is extremely rare, especially the type of late on-set that Cloud has.

Following Cloud’s diagnosis, the family came home to process everything and be with their extended family. While home, the family received a call from Cloud’s doctor, who referred them to two doctors who might could help slow down the progression of the disease.

After much consideration, Sloane and Carlyle decided it would be best for Cloud to see Dr. Maria Escolar of the Program for the Study of Neurodevelopment in Rare Disorders at UPMC Children’s Hospital of Pittsburgh. Dr. Escolar is known as the expert in Krabbe Disease and has patients from all over the world who see her specifically for Krabbe Disease.

While meeting with Dr. Escolar, she explained that Cloud could be a candidate for a cell transplant. Though the transplant is not a cure, it has shown to slow down the progression of the disease.

After multiple tests to see if Cloud was a good candidate for a transplant, Dr. Escolar informed the family that she thought he would benefit from a transplant.

On Wednesday, August 28, Cloud and his parents received the news they had desperately been hoping for; the doctors had found a match for Cloud.

However that news, also came with a catch. The procedure would require $500,000 to be paid in advance.

The family was devastated, especially with medical expenses from CHOA already arriving in the mail.

After much prayer, Carlyle reached an agreement with Children’s Hospital of Pittsburgh that allowed for the family to pay $250,000 down and the remaining amount in 60 days.

Friday, Cloud and his parents flew to Pittsburgh, where the doctors began testing and determined they would be able to go forward. Cloud has now begun pre-transplant treatment and has a date of September 18 for his transplant.

Even with all of the testing and prodding, Cloud has remained positive.

“Kids are so present,” aunt, Natalie Kirbo said. “He knows this is life now and he doesn’t even question it. The only thing he doesn’t like are the braces that keep his muscles from curling, but other than that he’s still really happy.”

Sloane and Carlyle added that he has continued to keep his sweet and funny spirit.

“His strength, bravery, resiliency and continuous joy has been amazing and encouraging to watch as his parents.”

With the due date of the remaining $250,000 fast approaching, the community has rallied together to fundraise in every way possible.

Natalie began with a GoFundMe page in hopes of reaching $10,000, but she was blown away when it was met within a day, so she has since just continued upping the goal.

“We never expected this,” she said. “People we’ve never even met have given to us and people we haven’t seen in years have donated. It’s been so good to watch God move people through this.”

Those interested in donating or giving have several options.

There will be a proceeds night at Uncle Bill’s Pizza on Thursday night given by MMO at First United Methodist Church, where Cloud used to attend.

Wendell Hall and Jamie Wade are selling smoked leg quarter plates for $10. They include a smoked leg quarter, Port City Deli potato salad, baked beans and pound cake. Tickets will be on sale until September 21 and the meal can be picked up on September 27 from 3- 6 p.m. at the J.O Smith Building at Bainbridge First United Methodist Church. Those interested can call 229-400-3963 or 229-220-5570.

April Pritchett is selling Boston Butts for $30 each. She can be contacted at 229-220-1498. The pickup date is Friday, October 4 and all proceeds will help with travel and medical expenses.

Confection Perfection is selling cloud shaped cookies for $20/dozen and all of the proceeds will go towards the family. The current waitlist is 34 dozen, but she has promised to get all of them out and donate everything to the family.

Jane Gay Wiggins has made homemade jelly for Cloud. She is selling black scuppernong or blueberry jelly. The cost is $5 for ½ pint or $50 for a case of 12 and $9 for a pint and $90 for a case of 12. Those interested can contact Wiggins at 229-400-3956 and she will contact you with arrangements for pick-up.

The Wear House has begun a T-shirt fundraiser. Each shirt cost $20 and sizes range from Youth XS to Adult 5XL. Those interested can comment on their Faceboook post, where they will continue to update about a time to pick up, where you can pay for the shirt at that time. All proceeds will go to the family’s medical expenses.

Ryan Higgins of Sowega Predator Adventures will be hosting a coyote hunt the second weekend of October. The details are still being finalized, but there will be multiple prizes given away and Higgins has promised to give away three ruger American predators.

Amanda Henderson has created support bracelets that have the verse Jeremiah 29:11 on them and be in navy blue, which is the awareness color for Krabbe Disease. The bracelets cost $5 and help with medical costs.

Most recently, Grace Christian Academy began a fundraiser. Their Bible class has created a t-shirt that costs $25 and all proceeds will go directly to the family. Orders are due by Friday, Sept. 13 and can be placed at the school office. In addition, they have asked all students to empty their piggy bank and are doing a penny stall. The teachers must count all of the pennies and other change before class can begin.

Finally, Natalie has set up a traditional GoFundMe page that allows for updates on Cloud and those interested to make any monetary donation they would like.

There is also a large $5,000 raffle in the works. Natalie is currently setting up the logistics. She said an anonymous donor gave $5,000 to help with this raffle and they will be selling tickets for $100. The tickets will be sold at First Port City Bank and at the office of Bruce and Wheat Kirbo. They are hoping to have live music and a silent auction, with the help of The American and Southern Philosophy Brewing.

Details are not available yet for a date, but Natalie is working tirelessly to get everything together.

The family thanks everyone for all the contributions and prayers that have been given.

“There are no words to describe how thankful we are for the prayers, support and fundraisers that been organized for Cloud,” Sloane and Carlyle said. “Our community has pulled together and shown us more love and support that we could have ever imagined. We couldn’t do it without them.”

However, there is one thing they want people to know. Testing for Krabbe Disease is not currently included in newborn screening in Georgia.

“Parents can and should request it to be done,” Carlyle said.

Although Cloud’s parents didn’t know about it, they aren’t giving up hope.

Following Cloud’s transplant he will undergo 12 weeks of therapy and if everything goes perfectly, be home by Christmas, where they can celebrate another year together as one big, happy family.