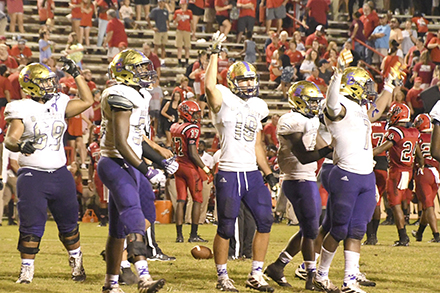 “It feels like state all over again,” a fan squealed as she jumped the fence during the final moments of the game.

The Bearcats took on the Syrupmakers Friday in Cairo, where the rivals went head to head in a close called game of 14-10.

“Hats off to Cairo,” said Head Coach Jeff Littleton. “They’re a very good football team and fought hard and were trained well. They were in their position to make plays and they did, but we just outlasted them.”

Littleton attributes this win to his player’s discipline.

The Bearcats’ defense kept the Syrupmakers’ offense to a minimum, allowing for only 178 yards total, while the Bearcats had 245 yards of total offense.

“We’ve got some things we have to clean up,” Littleton said. “We committed penalties, but what a good football team does is let the referees do their things, while we play our game.”

Littleton was proud to see the team fight through the adversity and make a play after the Syrupmakers drove it down the field in the second half.

“We came right back and did the same thing,” he said.

Heading into the fourth quarter, the Bearcats were determined to not let the Syrupmakers put any points on the board, and they were successful.

Jaylan Peterson intercepted in the third and fourth quarter. His fourth quarter interception came in the nick of time with six minutes left and gave the Bearcats possession of the ball. With this interception, and Tahari Tate’s fumble recovery in the fourth quarter the game was over for the Syrupmakers.

This is the third year in a row the Bearcats have beaten rival Syrupmakers. Next week the team will face off against North Miami Beach at home at Centennial Field.

My predictions for the three games to watch