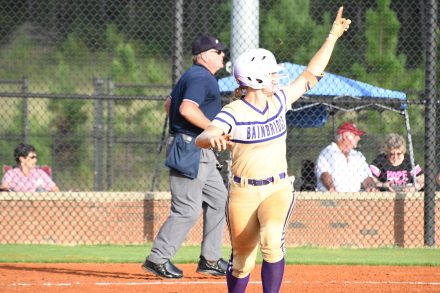 Halle Cannon throws up a number one after she hits a home run in the first inning to get things started against the competition.

Halle Cannon got things going in the first inning, when she hit a solo home run, giving the Lady Cats the first points on the board.

The Lady Cats continued their lead into the fifth inning, where they scored again, but soon Lowndes was on the board, also scoring a run in the fifth.

Lowndes knotted the game up at two in the top of the sixth inning, when number 15 singled on a 1-1 count, scoring a run.

However, in the seventh inning Lowndes took the lead for good, scoring eight runs.

Number 12 took the win for Lowndes. She surrendered one run on four hits over four innings, striking out four and walking zero.

Lexie Delbrey took the loss for the Lady Cats. She lasted six innings, allowing ten hits and seven runs, while striking out 12 and walking one. Keyleigh Brinson also threw one inning in relief.

Despite the loss, Bryant said he saw a lot of improvement in the team on Tuesday.

“They’ve started playing for each other and just taking each game as it comes,” he said.

Brinson led the team in at bats. She had two hits in four at bats, while Lowndes collected multiple hits.

The team will face off against Thomas County Central on Tuesday at TCC, where they are hoping for a win. Fans are invited to watch them begin at 5:30 as they battle it out on the pitcher’s mound.