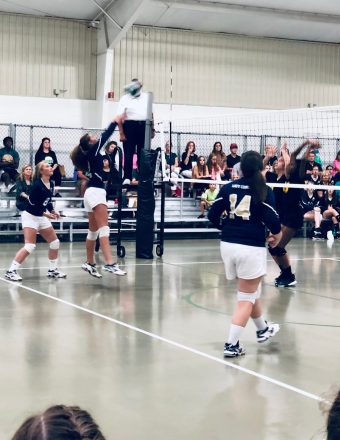 “The home crowd really showed up and I think it intimidated us a bit, but we got it together,” she said.

The team dropped the first set 25-20, while getting used to the excitement surrounding them.

Following that, the game was a knockout.

“We won the next three pretty easily,” Wells said.

“Those four were the real difference makers throughout the night,” Wells said.

Wells was proud of the team’s win and thinks their success may be due to the help of new assistant, Paige Winters. Winters previously played volleyball on her high school team and has been helping lead drills at practice, Wells said.

Wells said one of Winters main focuses has been on making sure every player is truly maximizing their skillset at their position. She wants everyone to be placed on the court where they have the most power and can contribute to the best of their ability.

Wells is excited to have the help of Winters and hopes this leads the team to more victories throughout the season. She cannot wait to see what they do next and where the season will take them.