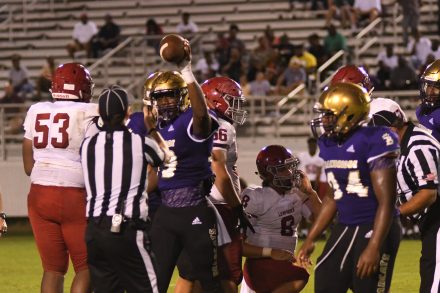 Bainbridge had some bright spots during its preseason scrimmage against Lowndes County, but there is plenty of room to improve, according to head coach Jeff Littleton.

Despite what the scoreboard said last Friday night, Bainbridge’s preseason scrimmage against Lowndes County was useful to the Bearcats.

“Overall, it was good,” said head coach Jeff Littleton, “even though the score didn’t indicate it. It made us aware of some things that we thought we might struggle with and we have to get better at.”

One quarter of J.V. scrimmaging put Lowndes County ahead 13-0. The scoreboard was cleared for the final three quarters, where the Vikings raced to a 37-2 win. Again, that number isn’t the focus for the Bearcats.

Littleton pointed out areas up front on offense and defense, as well as the linebacker positions, as those areas where inexperience got the better of them against the Region 1-7A Vikings. Not coincidentally, those positions were previously played by seniors who were leaders during last year’s state championship run.

The lack of experience at this point in the season is OK, though, and will undoubtedly be improved upon. After a summer of practicing against each other, putting new bodies in front of his players to compete against was a great way to measure where the Bearcats can improve.

“We liked playing against a really good competitor in our scrimmage game because it shows us where we are as far as execution,” said Littleton. “We worked all summer. We didn’t do anything new than what we had already been doing, and so we put a different person out there in front of us and we want to see how we execute on both sides of the ball plus the special teams.”

Friday, Bainbridge kicks off its season against Seminole County (Region 1-A), another chance for players to hone their fundamentals.

The Indians are led by first-year coach Trey Woolf, who Littleton expressed respect for.

“Coach Woolf will get (that program) going in the right direction,” said Littleton. “He is a great football coach and a great person. We look forward to playing them and us having a big crowd at the game.”

The Bearcats will need to execute their assignments better than they did against Lowndes County, just one of the ways Littleton will be gauging improvement in the players.

The Bearcats kick off against Seminole County at 7:30 p.m. at Centennial Field.