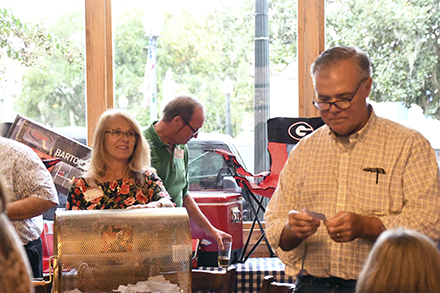 Joe Livingston reads off the name of a ticket buyer as CASA executive director, Nan McIntosh looks on and spins the wheel to pull out another ticket and name.

CASA of Southwest Georgia hosted their $10,000 reverse raffle Monday night at Southern Philosophy Brewing, where Deana Bell walked away with the grand prize.

CASA of Southwest Georgia is an organization that has 18 volunteers, who are trained advocates appointed by a judge to speak up for the best interests of children in foster care- both in and out of the courtroom.

The money raised from the reverse raffle helps the volunteers and children in more ways than imaginable, according to volunteer coordinator, Tim Green.

Green said after subtracting the grand prize money, along with second and third place, they believe they made between $14,500- $15,000. This amount also includes the generous donations made by Southern Philosophy, who donated 10% of the proceeds made during the event.

“This was really tremendous for us,” Green said. “All of the money will be put back into the services for those in foster care; I can promise it will be put to good use.”

Green said they use the money religiously for traveling to panel reviews or cases in other counties, or especially if the child gets placed outside of Georgia. However, they also get to use the money for special occasions such as, children’s birthdays and reunification parties.

Following the success of the event, Green and executive director, Nan McIntosh discussed the future and definitely believes the reverse raffle is something they will do again.

“It was just a resounding success,” Green said. “We couldn’t have asked for a better turnout.”

Green knows that in a community so tightly bonded that neighbors will continue to respond to an event that is determined to better the lives of children everywhere.

For those who were impacted by Monday night’s event and would like to get involved in volunteering, visit gacasa.org or email info@gacasa.org. Foster children with a CASA volunteer are twice as likely to find a safe, permanent home, and CASA of Southwest Georgia would love to see more advocates.

Green thanks everyone for coming out and supporting the cause and hopes to make next year’s event even better.