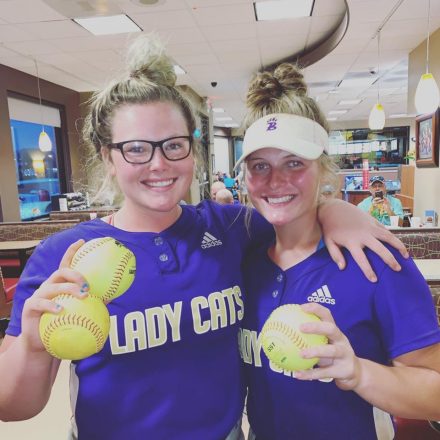 Lexie Delbrey and Halle Cannon smile while holding their home run balls after the game. Delbrey hit two and Cannon hit one against Seminole County.

The Lady Cats were neck and neck with Brooks County throughout the first three innings. Brooks County took an early lead in the first inning when number 21 singled and brought in a run, however it wasn’t long until they were tied 10-10 with the Lady Cats.  That all changed when Keyleigh Brinson stepped on base at the top of the fourth and hit a triple, bringing in two runs.

Emily McCullough led the Lady Cats to victory, surrendering three runs on six hits over two innings. She struck out one and walked zero. She did this with the help of teammates, Lexie Delbrey and Brinson. Delbrey threw two-thirds of an inning in relief, and Brinson started off the game, allowing three hits and seven runs over one and one-third innings. She struck out two.

“Our whole pitching staff did a phenomenal job,” Coach Christopher Bryant said. “Keyleigh starting off was fantastic, and the others followed suit and did fantastic as well.”

Number thirteen took the loss for Brooks County. She lasted two innings, allowing five runs on four hits and walked zero. However, number nine started the pitching and allowed two hits and three runs over one-third of an inning.

The Lady Cats tallied 11 hits total in the game. Wenda Shefield, Delbrey, Brinson and Taralyn Brown all had multiple hits that helped with the 12-10 victory.

Brooks County collected nine hits throughout the day, and kept the Lady Cats pitchers on their toes, with multiple runners on base throughout the game.

The Lady Cats opened up scoring in the first inning. Alaina Cox hit a sac fly, scoring one run for the team. The team really hit it off in the third inning, when Delbrey and Halle Cannon hit home runs.

“Those girls can swing it,” Bryant said. “They had great approaches at the plate, and we were able to do some things with the bat that we didn’t get to do during Thursday’s game.”

Delbrey hit another home run in the sixth inning, sealing the victory.

Seminole County’s number 24 took the loss. She allowed nine hits and 12 runs over the course of six innings and struck out ten.

The Lady Cats totaled nine hits throughout the game with Delbrey, Cox and Brinson each collecting two hits.

Monday afternoon, the Lady Cats played against Cairo, where they took a 10-0 loss after a long weekend of playing. They hope to be back with a win for their home game on Thursday afternoon.

Coach looking for team to stay competitive against Vikings…