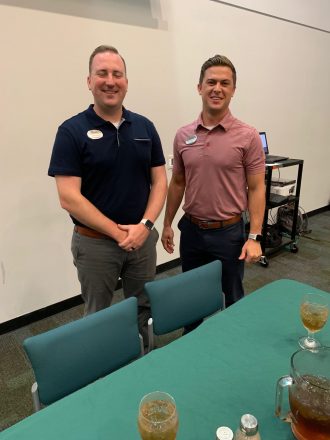 Joshua Apke (left) and and Kolby Shepherd (right) update Rotary Club Tuesday on the new Chick-fil-A being built in Bainbridge.

Each man gave a brief background of their association with the company. Shepherd has worked in the field for seven years, starting out as a cashier in a Virginia restaurant, working his way up to a supervisor of a staff of 120 people in three and one-half years. Then he began traveling around advising and training new owners. Now he will be opening his own restaurant and expects to employ between 80 and 100 positions, part-time and full-time. Interviews began last Thursday and there are already 60 applicants.

For those interested in applying for a job with the local Chick-fil-A, information can be found on the Facebook page: Chick-fil-A Bainbridge. It also lists some of the benefits, such as flexible hours (Sundays off), Competitive pay, scholarship opportunities for team members, meals provided and leadership development.

He cited his reasons for wanting to work there as believing they always offered the best in food and service, and of course, their family values.

He indicated it is not about how much money you have to invest, but who you are, and the performance and skills you can bring to the table. It is a matter of are you coachable and hardworking?

He explained that the building is actually owned by Chick-fil-A, which selects the building sites and begins construction. Then, they choose a new owner from a pool of those wishing to become owners. If the owner decides to retire or passes away, the building still belongs to the parent company.

Apke, managing director, has moved his family here from Willmington, N.C. He has been with the company four and one-half years. His future goal is to also become an owner.

Shepherd is most excited about the unique canopy drive-thru door—the first one of its kind in South Georgia. He also touted a couple of new menu items—macaroni and cheese and frosted caramel.

There are discounts on senior drinks and other discounts yet to be determined, as well as some opportunities for campouts and community event participation. It will be a full-service Chick-fil-A and there will be a playground. He promised it will be clean and safe.

Asked about traffic jams that may occur at the corner of Douglas Drive and Tallahassee Highway, Shepherd said they had some concerns about that and plan to work out a resolution of the problem with the city.