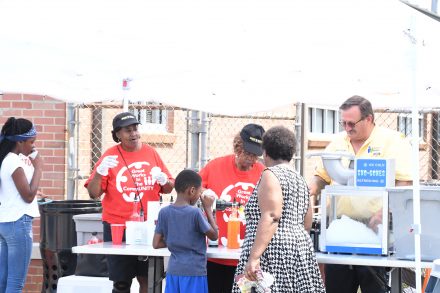 On Tuesday, a constant flow of several hundred citizens attended “National Night Out.” This family-friendly event provided a great opportunity to bring Bainbridge Public Safety officers and citizens together under positive circumstances.

The event, which took place from 3pm until 8pm, was held in the front parking lot of Public Safety Headquarters on Louise Street.

Kids and teens enjoyed playing basketball and running through an inflatable obstacle course which were both donated by Scott Summerlin of A & S Equipment Rentals. They also enjoyed hanging out and dancing with “Sparky” the Fire Dog, as well as exploring a fire truck, patrol car, and a Decatur Emergency Medical Service Ambulance.

Perhaps the biggest attraction was the “Rollover Simulator” which was brought to the event by Ken Weaver of the Georgia Office of Highway Safety. Children and adults enjoyed watching the live demonstration of a rollover crash. Weaver stated, “Seeing a dummy, which represents a person, being slung out of a vehicle window during a rollover crash really gets their attention and shows them the importance of wearing seatbelts.”

An assortment of beverages were provided by Kevin Horton of Pepsi, and Sergeant David Cutchin was the expert Sno-Cone maker. Attendees also were treated to hotdogs, popsicles, and ice cream…all at no charge. Special assistance at the event was provided by members of the Bainbridge service group, “Great Works in the Community.”

Bainbridge Public Safety Director Jerry Carter stated, “My hope for participating in National Night Out this year was to reach out to the community, especially the children, and create an event where they could interact with our officers in a positive light while having a lot of fun.” He went on to say, “There was a good mix of people of all ages, from babies to senior citizens, and that’s exactly what we hoped to see. We want to send the message that we are here to keep our community safe, and building a strong community partnership is a great way to do that.”

This was the first year that Bainbridge Public Safety has participated in this nation-wide event.

Public Safety Information Officer Julia Harris stated, “National Night Out in Bainbridge was a huge success and we are definitely planning to hold the event again next year, so go ahead and mark your calendars for the first Tuesday in August of 2020.”