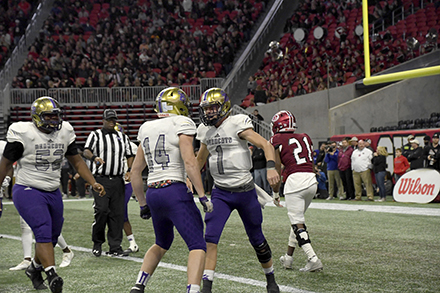 Bainbridge’s offensive line looks to remain strong on the end like it did last season, according to tight ends coach Tom Wheeler.

“We will work with the tackles to establish that edge,” said Wheeler. We really feel like we will be pretty good there.”

Unfortunately, the Bearcats’ senior tight end, Jackson Wheeler, is recovering from a back injury. Wheeler is hoping for Jackson to recover in time for Bainbridge’s season opener against Seminole County on Aug. 23.

Jackson McCullough and Arkeavious Marshall are working at tight end in Wheeler’s absence. Both players are getting reps at defensive end as well. Depending on how Bainbridge matches up with its opponents, Wheeler is hoping the tight end will have the opportunity to catch some passes as well.

“They are involved in both the run and the pass game,” said Wheeler on the tight end group. “I look for them to get their chances in the passing game.”

On special teams, the Bearcats are having to replace kicker and punter Caleb Harris, who punched in two field goals in overtime and double overtime to keep the Bearcats in the 2018 state championship game. Tahari Tate is getting the nod in practice on kick offs in punts, primarily because of the pure strength of his leg.

Garrett Sigman is getting the bulk of the reps at extra points and field goals, with holds from Quayde Hawkins and Michael Ryan, said Wheeler. Behind Tate and Sigman, Mason Ard and Blake Fagan are showing a lot of promise as well. Long snapping will be handled by Jackson Wheeler and Jackson McCullough.

Rashad Broadnax and Braxton Johnson, both players with good hands and quick feet, will be returning punts. Deyon Bouie and Zion Bouie will be in kickoff return.

Fans can have a chance to see Bainbridge’s tight ends, special teams and the rest of Bainbridge’s football team at Fan Day this Friday, starting at 5 p.m. at Centennial Field.