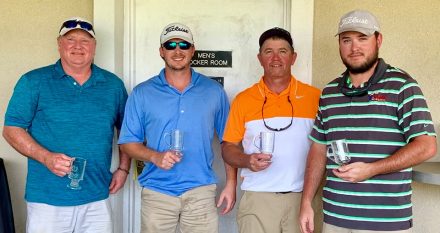 Sergeant David Cutchin explained that Kids ‘n Kops is designed to bridge the gap between the police and youth and BPS was honored that people gave up their time and were willing to donate to such a worthy cause.

Fourteen teams came out to play the 18 holes, with four people on each team. Several local law enforcement officers and firefighters participated, including three from BPS.

“It went wonderful,” Cutchin said. “Everyone had a great time.”

They all took home a trophy for their efforts and McRae additionally won “Closest to the hole challenge” on Hole #11.

The tournament offered $10,000 for a hole in one, but no one was able to make the perfect swing, although several players came close.

Cutchin said they were really proud of how it turned out, and it’s definitely something they want to do again next year. The funds raised from the tournament benefit the various activities Kids ‘n Kops participate in throughout the year. Cutchin explained this money can help fund their fishing trips and their annual November fun day.

However, he knows this would not have been possible without the generous contributions from sponsors, volunteers and all players. Cutchin said he thanks everyone and is excited to begin planning for next year and the activities to come.