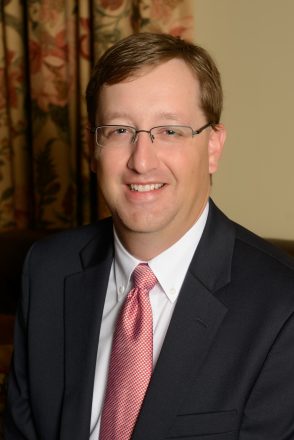 Bert Hines, vice president and commercial lender at First National Bank in Bainbridge, has been elected by his peers in the southwest Georgia to serve a two-year term on the Leadership GBA Executive Committee for the Georgia Bankers Association (GBA).

Created in 1958, Leadership GBA is committed to developing the future leaders of the banking industry. The goals of the program are to promote leadership development and ongoing professional learning, create networking opportunities and encourage involvement in the legislative process and advocacy on behalf of the industry.

“Bert is among the best and brightest emerging leaders in our industry, and we’re fortunate to have someone of his caliber serving in a leadership role. We are excited about benefiting from his perspective,” said Chuck Copeland, GBA chairman and president and CEO of First National Bank of Griffin.

A native of Bainbridge, Hines earned his bachelor’s degree in business administration from the University of Georgia in 2002. He began his banking career in Bainbridge in 2010 and has been with First National Bank since June 2016.

Hines has served in many leadership positions in his community. He is currently treasurer of the Southwest Georgia Regional Library System, president of the Bearcat Touchdown Club as well as a youth sports coach with the Bainbridge YMCA, Bainbridge Recreation Authority and Diamond Kings Sports Academy.

Founded in 1892, the Georgia Bankers Association promotes the general welfare and usefulness of banking and the preservation of a sound banking system. For 127 years, the GBA has provided Georgia’s banks with top-quality professional development, revenue-enhancing products and services, government relations and public advocacy.

A financial advisor can help with a survival plan