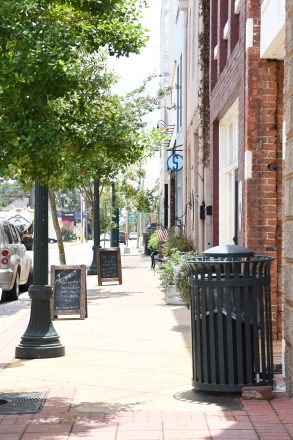 The second Saturday of every month will be a can’t-miss event in downtown Bainbridge.

A new event planned for downtown Bainbridge will be celebrated for the very first time on Saturday, August 10.

Sponsored by the downtown merchants association, in partnership with the City of Bainbridge, it is being called Second Saturday in Downtown Bainbridge. As the name implies, plans are to observe it on the second Saturday of each month. “This is similar to the First Friday concept seen in many other communities,” explained Jessica Allen Polsky, owner of Maiden South.

She sees it as an opportunity to draw people downtown where they can participate in the events planned by each merchant. It is also an occasion to help restore the tradition of people gathering in downtown Bainbridge on Saturday nights to shop and visit with others the way it they used to do. She adds that downtown merchants report 90 percent of their customers are from out-of-town, so Second Saturday should also serve as a draw in helping Bainbridge become a destination city.

Merchants will remain open until 8 p.m., many with sales or special events. Restaurants will be ready to serve and there will be music and different activities each month.

The first date, August 10, is being called a Summerfest, or celebration of the end of summer. People can cool off by running through sprinklers in the park if they desire. There will be games for all ages, music playing and lemonade will be available. Adults can observe a happy hour.  The theme of following Second Saturdays will change somewhat each month along with the seasons.

Activities begin at 10 a.m. and continue until 8 p.m. During that time all are invited to come on downtown to meet their friends, do a little shopping and enjoy all Downtown Bainbridge has to offer.