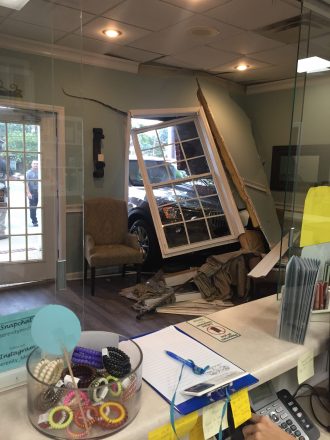 Friday morning at approximately 8:55 a.m. Bainbridge Public Safety responded to an accident after Violeta Adams, 83, drove her vehicle into the front window of Serenity Med Spa.

Spa receptionist, Kelly Phillips said no one was in the waiting room or having any treatments when the accident occurred because it was so early in the morning.

“At first I thought they were teasing me when they said a car was in the waiting room, but I ran down here as quick as I could,” Phillips said.

Phillips said Adams was not hurt in the accident. Adams had pulled into the parking lot and intended to press the break, but pressed the gas instead.

“We were very blessed that it happened in the window and she didn’t hit the brick; her car was hardly damaged at all,” Phillips said.

The spa did have to shut down on Friday to make sure the structure was still sound and the roof was intact, but they have since patched up the hole and are just awaiting the insurance company to begin the process of fixing the damage.

“We are very happy we are still open and were able to get back to work on Saturday,” Phillips finished.

Adams was assessed by EMS and her car was towed away, however no citations were issued due to the fact it was an accident.