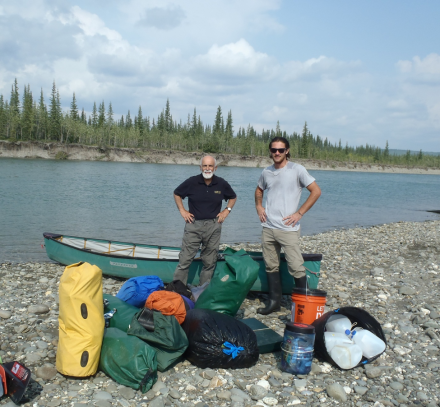 Several years ago my wife Barbara and I promised Parker Boyd, son of Jennifer Barber and Russell Boyd, and a young man we have known since he was belt high, that if he graduated from high school, we would take him on a wilderness adventure. This year we were able to honor that promise. He is now 22, and a graduate of Bainbridge High School.

The Middle Fork of the Koyukuk River can be accessed at the small settlement of Wiseman, Alaska on the Prudhoe Bay Haul Road, about 250 miles north of Fairbanks. The river lies above the Arctic Circle and flows 60 miles southwest from Wiseman to the town of Bettles before it continues on for another 500 miles and joins the Yukon.

The year has been hot and dry in Alaska. Heat records have been broken throughout the state and air has been smoky from Valdez to Nome.

Day 1 we loaded our gear into our collapsible canoe, being careful to balance the load, and tied everything down in case of an accident. We pushed off from shore in the swift current. The water level was low since Alaska has been unusually dry this year; and the river twisted left and right.

We camped that night on the side of the river pushed up against alder bushes to secure some shade against the hot sun. 88 degrees is hot weather in Alaska. Although we started the night with a thin sheet, by 2am we had two wool blankets. Thunder rolled in after our dinner of freeze dried chicken teriyaki. There was no rain. We paddled 15 miles and saw no one else on the river today.

In early July the sun barely sets below the northern hills around 11 p.m., and pops up again by 2 a.m. There is no darkness. You can read a book at midnight.

Day 2 started bright and clear. We took down the tent, loaded the canoe and pushed off again. Often the river ran very swift along the bank under sweepers – these are trees that have had their roots undermined by the river. They lean out over the water. If you are caught under one, they sweep you out of the canoe into the cold water and overturn the boat.

To avoid sweepers we often had to get out of the canoe, attach a rope to front and back, and line the canoe through shallow water. I fear sweepers.

We pitched our tent in an alder thicket again to secure some shade, ate another freeze dried dinner, and turned in tired paddlers after a 20 mile day. We saw no one today and no sign anyone had been there. Our campsite had moose and wolf tracks.

On day 3 we almost capsized. The river took a sharp turn to the left which we executed deftly in a stiff current until we hit a large rock under the surface that we hadn’t seen. The right side of the canoe slid up on the rock causing the left side to dip dangerously close to the water. Paddling on the right side with all our strength, the left side missed falling below the water by an inch. Had the water started flowing into the canoe on the left, in a matter of seconds the canoe would have flipped and thrown us into the river. Another day when we saw no one on the Koyukuk. Who would have helped us?

Our campsite this night had more moose and wolf tracks. Twice during the night I heard creatures around the tent and had to scare them away with thumps on the tent wall and zipper noises.

We loaded the canoe and departed early on Day 4 hoping to limit the heat and smoke. Yesterday afternoon we passed the confluence of the North Fork of the Koyukuk. The river was wider now but no less demanding. Often it braided into islands and we had to ground the canoe on the apex of the island, get out, investigate and decide which white-capped fork to take.

Following a mid-afternoon break, we pushed the canoe back into the river. Parker stepped into the front seat first, and I lifted my boot to enter the back seat. My boot caught on the canoe edge, I lost my balance and landed flat on my back in the stone-bottom river. Wet and embarrassed, I changed clothes and we paddled on.

Not fifteen minutes later we rounded a bend and there high on a bluff was a house. We both shouted Bettles! Our first sign of anyone else in four days.

Several hundred yards past the first houses the bluff drops to a rocky beach. We pulled the canoe up on to the rocks and walked the half-mile past Bettles Airfield to Bettles Lodge. Donna greeted us with a smile and arranged for a truck to take our gear and canoe to the grass next to the lodge. “Don’t worry about your stuff. Nobody steals anything. Where would they go?”

The next day Parker and I flew back to Fairbanks on a single engine prop plane. We were tired and proud.