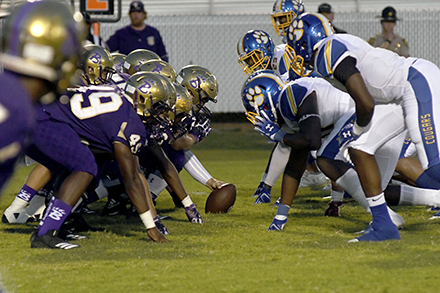 The Bainbridge offensive line is looking to duplicate last year’s success at the line of scrimmage. Improvements are being made every day this summer.

The Bainbridge offensive line is getting 1 percent better every day, according to coach Ryan Kineard.

“These guys are working hard,” said Kineard. “As far as physicality, we’re probably better up front this year. But the learning curve, we are having to fill so many spots.”

Those spots Kineard is referring to were occupied by Region-leading linemen Jacob McLaughlin, Ben Mitchell and Brad Mitchell, a trio of seniors that were anchors to Bainbridge’s offense in 2018. The crystal-clear communication and expectations between Kineard and the three players developed over time. Now Kineard is coaching the next group to perform like they did.

Lawson Chandler, a junior, is one of the players Kineard has big expectations for this season, as is senior Conner Priest and junior Ridge Baggett. Senior Damien Scott started three games last year for the Bearcats, including the quarterfinal playoff game against Buford. Vick Wimberly, another senior, is taking on more of a leadership role every day. Kineard likes what he’s seeing out of the group, he just wants them to keep pushing.

One percent better every day. At the very least, that’s what Kineard wants to see. Steady improvement is what kept Bainbridge competitive toward the end of the 2018 season when many of its opponents had already peaked.

“The guys this year are getting there, they just have a lot to learn and we are having to cram it all in one summer,” said Kineard. “They have big shoes to fill and the standard was set pretty high, but like I said, we are getting a little bit better every day. Our run game stuff looks good. We are running the ball really well. We have to step it up a little bit on our protection, but we are getting better at it.”

Kineard expects greatness, he said, something this group of offensive linemen can achieve.

“We just have some growing to do, and we have a little bit of time to do it,” said Kineard.

Tiger peaked at The Masters