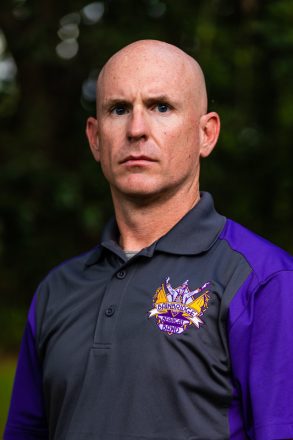 Moore, originally from Vidalia, Georgia, has been teaching elementary music in Whigham and Cairo for the past 16 years and working with their band program. However, his wife, JoAnn teaches music at John Johnson Elementary, so he was excited to finally be in the same school system and on the same schedule as she.

“Sometimes God opens a door for us, and it was open and I took it,” Moore said.

Moore is still getting his feet wet at his new position, as he just took over in the past week, but he has been looking into what the middle school band has done in the past and seeing what can be improved upon.

Moore said there are currently 89 sixth graders who have already signed up to participate in the band this year, but he won’t know the number of fifth graders until the first week of school begins.

He encourages the fifth graders and their parents to swing by the band room at open house to get more information and see all the possibilities band could offer them.

Although he doesn’t know the exact number of fifth graders, Moore said one of the things he would love to do is start spending time recruiting the fourth graders, so when they do move up to the Middle School they will consider band as one of their classes or extracurricular activities they partake in.

“I can’t wait to see where this program goes in the future,” he said. “They are your lifeline and future.”

Moore’s favorite part of working with the young band members is seeing their progression. He explained that at the beginning some of the kids don’t even know how to hold their instrument, but by the end they are performing a concert.

“It’s neat for me to see them improve in such a short period of time,” Moore said.

Moore looks forward to watching all the students grow and learn this upcoming year and being a part of their middle school band experience.

“I’m excited to be here and I’m very appreciate to Dr. Gardner and Mr. Sewell for giving me this opportunity. I can’t wait to be a part of the Decatur County School System,” he finished.