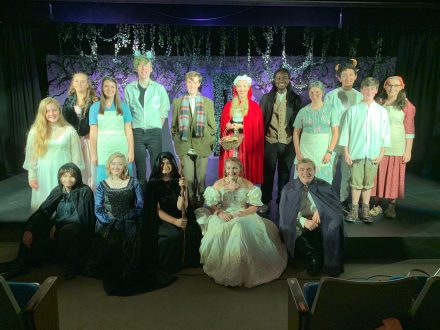 The cast of Bainbridge Little Theatre’s “Into the Woods, Jr.” in costume and ready to put on a show this weekend.

All of your favorite fairy tale characters come alive with music this weekend when the teen group of Bainbridge Little Theatre’s Summer Class Act workshop presents “Into the Woods Jr.” It incorporates many of the Brothers Grimm fairy tales all rolled into one.

The Tony award winning musical by Stephen Sondheim and James Lapine has been updated and modified to make it more accessible for young performers. Director Brandi Adkins says it is a departure from the film, as there is more comedy, albeit it is a dark comedy. “I am excited to direct it as it is different from all the other summer productions that have been done here.”

The characters of the play all have special wishes and the plot revolves around how they deal with their situations. A baker and his wife are unable to have a child because of the curse of a wicked witch. Jack and his mother wish his cow would give milk, while Cinderella wishes she could attend the King’s festival.

The cast includes Kaitlin Floyd, who convincingly portrays Cinderella. Her mother is played by Isabella Barnett, her father by John Ingram and the stepmother by Ashlyn Brock. John Ingram also takes the role of Cinderella’s prince.  Kim Johnson is Florinda and Aubri Josey plays Lucinda, the nasty step-sisters. The baker is portrayed by Seth Jones, while his wife is played by Brooke Phillips.

Alaiya Schuyler enjoys the challenge of being the wicked witch who has placed the curse on the baker and his wife. “It is fun to play the villain. It’s a different experience and I can put my own spin to it,” she explains.

Assistant director is Connor Rentz. Rachael Crager is the producer and Rachel Rentz serves as acting consultant. Performance dates are Friday night, July 19 and Saturday at 7 p.m., with a Sunday matinee on the 21st beginning at 2:30 p.m.

Tickets are available at the door, or can be reserved on-line at www.bainbridgelittletheatre.com.