Bainbridge defensive line proving to be athletic, quick with some depth 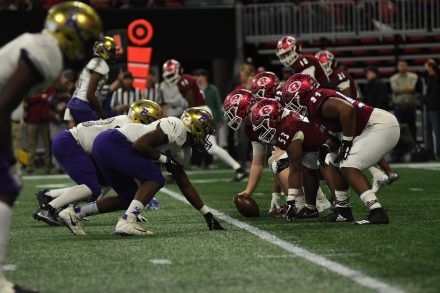 Bainbridge’s defensive line was explosive during the 2018 5A State Championship game against Warner Robins. A quick, more athletic defensive line is what Bainbridge is building towards.

Today’s defensive linemen in all levels of play are taller, leaner and quicker than they ever have been before.

Last year’s front seven certainly fit that description for Bainbridge, especially the defensive line. Led by defensive end Roman Harrison, the Bearcats’ speed at the line of scrimmage played a major role in blowing up plays in the backfield, clogging up the middle and blocking field goals. Harrison got his hand on a go-ahead field goal against Warner Robins with seconds left in the 2018 State Class 5A Championship game.

The rest is history.

“They set a bar and played well for us all year and were very instrumental for us in being able to win the games and close the season the way we did,” said defensive line coach Brian McCorkle. “There is a standard there that has been set years ago. But those guys really took a step forward last year, pushing that envelope and saying look this is the way we are going to play up front.”

So who will step up to play those roles and live up to that standard in the 2019 season? McCorkle believes the current defensive linemen have the athletic ability to achieve everything last year’s squad did.

Sophomore Jashon Mitchell is someone who has impressed McCorkle during summer workouts. He’s young, but saw some playing time last year, and should be able to fill the role that Harrison had in 2018. He won’t be asked to  do everything Harrison did right away, clarified McCorkle, but Mitchell has the potential to and pure athletic ability to have the same impact.

“We have some depth back in Eric Sanders, Simpson Bowles and Jackson McCullough, who came in at the end of last year,” said McCorkle. “Ridge Baggett is coming on strong also.”

The entire group is athletic from top to bottom, said McCorkle, and have a good mix of skills.

“We have some guys who can come off the edge and go hunt, and we got some bigger guys who can stay in the middle there and hold up inside,” said McCorkle. “They are a very athletic group all the way around. That’s one of the things we have tried to do over the years, get more athletic up front.”