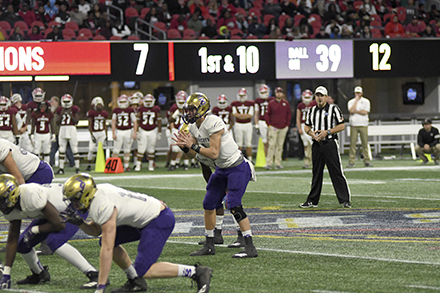 Junior Quayde Hawkins will return to the starting position under center in 2019 with 15 games and a Class 5A state championship worth of experience under his belt from last season. The summer has been filled with 7-on-7 camps, one of which Bainbridge made to the championship round at Troy. Those have helped tune Hawkins’s arm, but Harville says there is still plenty of room for improvement in the 6-foot, 160-pound signal caller.

Compared to this time a year ago, Harville said Hawkins is “much better.” Being familiar with the offense has allowed for even more fine tuning in Hawkins’s game, as well.

“There are things that he sees that have slowed down for him,” said Harville. “But there are other things, too, that we have got to pick up, do some drill work and help him out to make him that much more accurate on Friday nights.”

In 2018, Hawkins was 144-of-305 for 1,695 yards and 12 touchdowns. He rushed 46 times last season, as well, good enough for five touchdowns, including the go-ahead score in triple overtime that gave Bainbridge the win over Warner Robins in the 2018 5A state title game.

The recent 7-on-7 camps Bainbridge has attended has given that much more practice for Hawkins and the corps of wide receivers Bainbridge will field this season. Getting both the quarterback and receiver receiver on the same page can be difficult, but Harville is confident there is progress being made. Injuries have hindered some quarterback-receiver development this summer too, namely in senior wide receiver Michael Ryan, who is expected to make big contributions this season.

Harville is looking forward to mixing the pass with the run a little bit more this season, but that presents even more challenges for a quarterback in reading the defenses correctly, a skill he’s working closely with Hawkins on.

“A receiver has a certain route, and the defense can give them three or four different looks, so the adjustments are there,” said Harville. “You try to keep it simple, but it gets very complicated at times.”

“(Bouie and Jenkins) are very capable of throwing the football down the field,” said Harville. “We also have three or four (freshmen) that have come in, and we are developing them. We do need some more younger depth, but hopefully that is in the making.”

Superstars everywhere, not just on one team