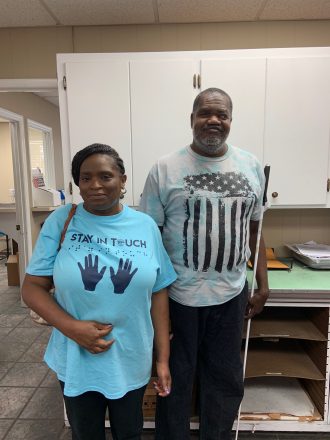 Bainbridge Lions Club campers Keith Carter and Tonya Wright reminisce about their annual visit to the Georgia Lions Camp for the Blind.

Bainbridge Lions Club campers Keith Carter and Tonya Wright enjoyed some fun activities during their recent annual visit to the Georgia Lions Camp for the Blind near Waycross.

“We got to sing some Whitney Houston hits and my fellow camper Keith Carter enjoyed some horseback riding,” Wright said. “My favorite song was Tears on My Pillow.”

“The camp instructors kept us busy with a lot of fun activities,” added Carter. “One of my favorites was horseback riding.”

The camp had an outstanding beginning. On November 27, 1974, a delegation of Georgia Lions met with Georgia Governor Jim Carter, who later became president, to secure 62 acres of land located in and around the park.

The camp catfish pond was constructed at that time near the back of the property and it is still enjoyed by campers today.