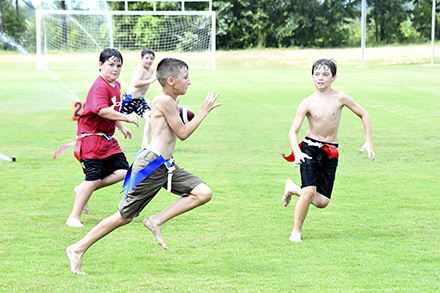 Kids between the ages 4-12 could be seen trying to rip each other’s flags off as they competed in a game of flag football in the sprinklers Tuesday at the Play Bainbridge Summer Sports Camp.

The camp offers kids a look at a variety of sports, such as tennis, flag football, soccer, baseball and softball, that they otherwise may not get an opportunity to play. Last summer was the first year the camp was offered, and it proved to be a success. Camp leader Karson King said they have about the same amount of kids as last year, who are ready to learn all about the sports offered.

King was excited to teach them about baseball and softball, but she really was just hoping to open up the kids to new sports.

“I want them to have a chance to learn new things and do things they wouldn’t normally try, but they are able to in this aspect get a little taste of everything,” she said.

King enlisted the help of tennis instructor, Tim Thompson to help the kids with tennis, former Bearcat, Mark Loeffler to help with football and Breanna Pritchett to assists in soccer.

Cody Smith, 10, was most excited to learn tennis, because he said that is the only sport other than golf he’s never played.

“That’s what is so neat about it,” King said. “He is able to be exposed to the game and see if he likes it or not.”

Corbyn Harrell, 6, was most excited to play flag football, because he said that is what he is best at. Harrell, like Smith, had never played tennis, so he did enjoy learning about the game and getting to slip n’ slide at the end of the day.

The kids will finish out the week by separating into groups for softball and baseball, before playing a game against each other.