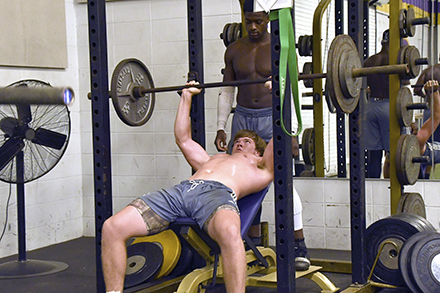 Jackson Wheeler, spotted by Eric Sanders gets one more bench press rep in before the whistle Tuesday.

With only a few weeks of summer left before school in Bainbridge picks back up, the Bearcats are still competing at every position, and will likely continue to well into the season, Coach Jeff Littleton said.

“We’ve gotten a lot of kids that played a lot of different positions,” said Littleton. “We have moved people around and we are still searching for that final component, and we will all the way into region play. It’s a long process.”

There’s plenty of space for hungry young players to leave their mark after the Bearcats graduated a large chunk of its defense after its 2018 5A State Championship season. Leadership is up for grabs, and older players like Jackson Wheeler are doing a good job of setting examples for the rest of the team, said Littleton.

More players need to step up in the coming month, though.

“That’s what the summer is for, to build those leaders,” said Littleton. “We are still searching for those leaders on our football team.”

Leaders can lead by example or vocally. They take care of things the right way, Littleton said, including the small details that might be overlooked. Most of all, Littleton wants to see his team develop into a unit that can handle the rollercoaster ride that a long season will take them on.

“The team goes through highs and lows. You celebrate the highs but you can’t concentrate on

them,” said Littleton. “As far as the lows, you have to learn how to fight through adversity. Last year’s team figured that out, and this team has to find their own way as well.”

In June, the Bearcats attended 7-on-7 camps at Florida State, Troy and Valdosta High School, where they competed against dozens of different schools from the tristate area. Littleton said the experience was great for development in the Bearcats’ passing game and pass defense.

Starting next issue, for the next eight issues, different positions of the 2019 Bearcat football team will be broken down, highlighting the key players and what to look out for in the coming season.