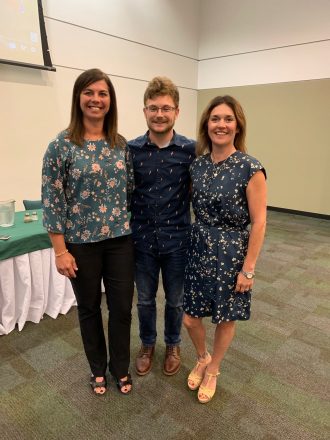 Rotarians heard on Tuesday of yet another new business getting ready to open in downtown Bainbridge. Dawn Richardson told of her plans to open a new boutique Lift Gym at 223 Troope Street, across from The Bainbridge Little Theatre.

Richardson gave a personal story of how she became interested in health and physical fitness when she developed a health condition.

In 2009 she began being interested in a physical fitness program and went on to get the education to become a physical therapist assistant in 2011.

As she was excited about how exercise can change lives, her goal became to change one person the way she had been changed. As she has served at the YMCA since 2011, she has certainly had the opportunity to use her skills to change many lives, be it in an organized class or being the program at birthday celebrations. She said she has used her training in many ways.

She and her partner Melissa Richardson decided to open their own business and began looking for a location. They were excited to find the building on Troope Street, particularly drawn by the history of the building and the neighborhood. She said she has heard many stories about the building, including that it was once a pool hall, and was presented with the original door knob by Jim Conger.

In the process of the rehabilitation, she and the contractor have found many old newspapers of historic interest in the walls and ceilings. They are also finding ways to re-use parts they have removed. She has given credit to the Downtown Development Authority for the help they have received.

They plan to have all the remodeling completed with a target opening date of January 2020.

Calling it a boutique fitness studio, Richardson explains that it will be different from a regular gym. They will use smaller spaces and have personalized classes for all levels and ages. She promises a positive atmosphere, and that there will always be someone there to assist. All classes will be led by trained instructors.

Payment will be based on class packages. There will be no memberships sold, as they concentrate on personalized workout choices.

Not too late to help Memorial Hospital and Manor…