Light Up the Night 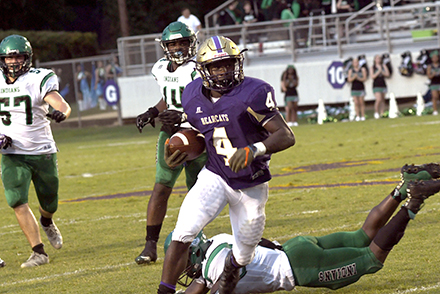 Better Than Ezra members James Arthur Payne, Jr., Kevin Griffin and Tom Drummond, with Michael Jerome behind them on drums, wow the crowd with a cover of The Rolling Stones’s “Miss You” Thursday night at the Earle Mat Boat Basin.

Thousands of freedom-loving Americans filled the Earle May Boat Basin Thursday evening to celebrate the Fourth of July with music, food, and of course, a fireworks show like none other over the waters of the Flint River.

Guitarist Paul Nelson got the show started around 6 p.m., with blowup rides, games and food vendors drawing in bigger and bigger crowds as the night went on. By the time the sun went down, the boat basin was buzzing with excitement, energy and patriotism.

Rock band Better Than Ezra took the stage and put on a performance that included everything from their own material to Atlanta rap group Outkast to classic hits from The Rolling Stones.

After their performance, fireworks took to the skies, putting on a show of dazzling lights and vibrant colors. The display was  a reminder to all of us of the sacrifices that generations of men and women made to keep our country free.