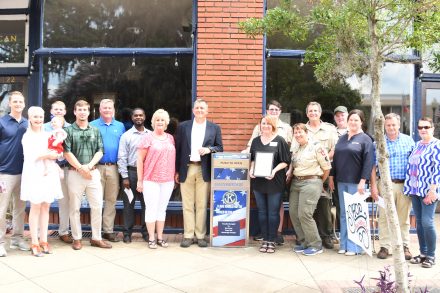 Thursday afternoon Terrie Hurst from the Department of Veterans Services spoke to the Kiwanis Club on how they serve veterans in the area.

The Department is a state government agency that was established to advocate for Georgia veterans and their families. In Georgia there are over 700,000 veterans, making up almost seven percent of the population. In Decatur County alone, Hurst said there are 1,800 veterans.

Among the states, Georgia ranks ninth in veteran’s population, but fifth in veteran’s supplements and pension payments. The benefits center is where Hurst sees the most veterans in need, and where she focuses most of her time. She said 125 field officers dedicate their time to helping veterans and their families apply for and gain access to their state and federal benefits they have worked hard for.

The Department also has a partnership with VA and works closely to help veterans file claims and get the care they need through VA. For communities that are not close to VA or the Department, Hurst said they offer satellite communication and visit those communities on an as needed basis to make sure they are taken care of.

Hurst said they want to make sure every veteran feels their outreach. They also have a women’s veterans center. Georgia is home to more than 90,000 women veterans, who use this service for military sexual trauma, PTSD and help with advocating for the medical needs of women veterans.

In addition to the programs offered, the Department also owns two veterans nursing homes and two veterans cemeteries, one of which is located in Milledgeville. The nursing homes are located in Augusta and Milledgeville. In order to become a resident at the homes, a person must be a Georgia veteran and have served during wartime, which most recently includes the Cold War.

“So many of Georgia veterans have put their lives on the line in the combat of this country, it is time for our fellow citizens and government to show their appreciation,” Hurst said.

In order to show their appreciation, the Department gives war certificates and holds programs across the state for Vietnam veterans. They have now given over 25,000 certificates, Hurst said.

Hurst concluded her program by answering questions and encouraging others to send veterans to the Department to get benefits and receive their certificate.

To honor veterans and celebrate Independence Day, the Kiwanis Club funded a flag drop box the following day. The drop box was blessed by Councilman Kregg Close and is posted in front of The American restaurant.

The Boy Scouts will maintain it, where they will discard of all flags properly, as tattered flags should never be thrown away in the trash. People do not have to fold up the flags; once they are deposited the scouts will take care of it.

Mayor Edward Reynolds made a proclamation and believed this would be an excellent asset to the community, teaching the scouts responsibility and also helping take care of the flag.