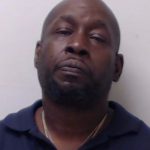 Early Monday morning around 2 a.m., E911 dispatched Bainbridge Public Safety to the Emergency Room of Memorial Hospital in reference to a person shot.

Sergeant Toby Miller responded. According to BPS Investigator Chip Nix, a card game at a residence on Dennard Street turned into an altercation, resulting in the shooting of Leon Monroe Chandler, 34.

The shooter, who fled the scene, has been identified as Jamel Christopher Jackson, 48. Jackson should be considered armed and dangerous.

Anyone with information as to the whereabouts of Jamel Jackson is urged to call Investigator Chip Nix at 229-726-4119, email at chipn@bainbridgecity.com, or send an anonymous tip at:http://www.bainbridgecity.com/…/police_d…/submit_a_crime_tip