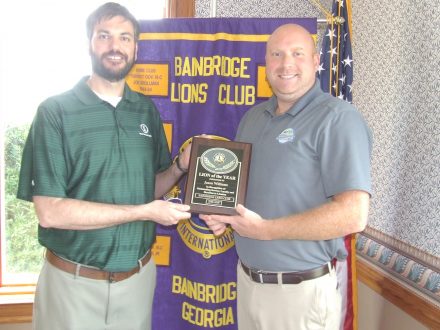 Stephen Whittaker, who was installed as Lions Club president, said it was a privilege to announce Williams, the club’s first vice president and who also served as program chairman, as Lion of the Year.

“When Jason Williams, who is also our Lion Tamer, joined the Bainbridge lions Club in 2016, he did not hesitate to jump in with both feet,” Whittaker said. “Over the years he demonstrated a heart of service, faithfully attended meetings and loyally serving, whether it was driving stakes into the ground for Mule Day in Calvary or through his positions on our board of directors and as our program chairman.”

Annex is only location for advance voting

The West Bainbridge polling location will be at a new location beginning on the Nov. 5th Municipal Elections. The School... read more