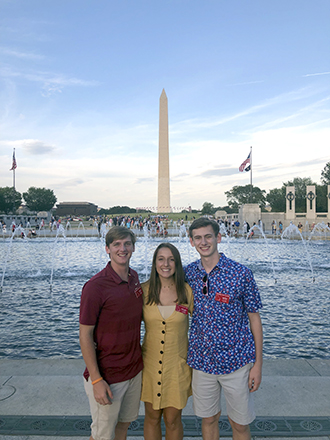 From left: JT Andrews, Sandy Baker and Max White enjoy a day out exploring our nation’s capital at Washington, D.C.

Outstanding students from across Georgia, including JT Andrews, Sandy Baker,  and Max White from Grady, Decatur, and Thomas counties, recently returned from the Washington Youth Tour, a week-long leadership experience exclusively for teens sponsored by the electric cooperatives in Georgia, including Grady EMC.

From June 13-20, Andrews, Baker and White joined 1,800 of their accomplished and ambitious peers in Washington, D.C. to understand the importance of civic engagement, to tour national historic sites and to learn valuable leadership lessons they can utilize in their communities back home.

The lessons learned by students cannot be replicated in the classroom.

Adam Starr with Grady EMC believes that this carefully chaperoned tour of the nation’s capital, full of our national treasures, provides not only an opportunity for an enriched history lesson but also a unique experience that includes interactive exhibits and firsthand accounts.

Starr says, “When I picked our students up from the airport, the very first comment that I heard was, “I’m forever changed!” This is the impact that the Washington Youth Tour has. Being part of this program is one of my favorite things about working at Grady EMC.”

In Georgia, this year’s contingent included 115 student delegates, 13 chaperones and three tour directors who attended a kick-off banquet in Atlanta for the student delegates and their families before departing the next morning for D.C. for the remainder of the trip.

“The students watch history come to life as they walk and talk in the same places where people have helped shape our country,” says Starr.

“They also meet other delegates from across the country with different backgrounds, life experiences and walks of life to give them a broader perspective and deeper appreciation of the world at large.”

With a firm commitment to enriching our future, the purpose of the Youth Tour is to help EMCs develop our state’s most precious resource, our youth, according to Starr.

In addition, the group had dinner one evening at Toby’s Dinner Theater and saw the play “Grease”.

In addition to taking in the sights of the nation’s capital, students gained perspective on some of today’s important issues and their role as involved citizens. Everyone had the opportunity to engage with staff and/ or members of Georgia’s congressional delegation as well as a visit with U.S. Secretary of Agriculture Sonny Perdue.

Nearly 50,000 students from rural areas and small towns across America have participated in this program. Some Youth Tour alumni have gone on to design airplanes, to lead companies and to serve in the highest ranks of government, including the U.S. Senate, and many more are serving in some role in state and local government.