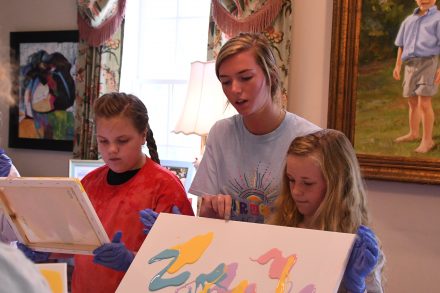 Rising GCA senior Kate McRae has faced her share of obstacles. She was diagnosed with a rare form of ovarian cancer at 15 years old, but now she is taking that diagnosis and raising awareness by hosting an art camp for young girls in order to raise and donate money to the ovarian cancer research foundation.

During the summer before her sophomore year of high school, McRae started to lose weight, lost some of her hair and had multiple infections. Her mother took her to the local gynecologist, who told her it was a result of all the stress she was putting on herself from sports. McRae took the advice and gave up her multiple activities and took to making art. She especially enjoyed pour paintings. However, she still was depressed and went to Thomasville, where they took an MRI. Following the MRI, McRae had her left ovary removed and was found to have a rare type of cancer.

She was sent to MD Anderson Cancer Center in Texas, where they still have found no cure, but were able to locate a specialist.

Following this diagnosis, McRae was put on birth control and has an MRI every three months and her blood drawn every month to monitor the situation.

While everything seemed daunting at the time, she found art as an outlet.

“Art allowed me to create anything I want,” she said.

This love for art and newfound passion to share her story is what allowed McRae to host her art camp, Color me Kate.

McRae said she was ashamed and embarrassed of her diagnosis at first, but now she just wants people to be aware, because this type of cancer is more common in young women her age.

At such a young age, McRae said she really didn’t focus on what was happening because she was too distracted with school, work and athletics. However, when school slowed down McRae realized what was happening and went to counseling, which she strongly encourages for anyone facing something like this.

“I’m really glad I went,” she said. “It definitely helped me.”

McRae wants to also encourage other young women who may go through a similar situation to not be embarrassed or ashamed.

“Don’t let it hold you back,” she said. “It makes you a better person really.”

McRae also wants people to know that God is with them through all of this and He will watch over them and protect through this.

McRae’s camp began Monday, where she let her campers choose four colors to pour on their canvas, before she shared her story with them and they all swam and ate dinner together.

She hopes her story will help other young women and will also open up her campers to the freedom of expression artwork can give them.

Mostly importantly though she wants her campers to beware of what others are going through and always be kind to others.

Chick-Fil-A under construction in Bainbridge, to open this fall