Masterpieces in the making 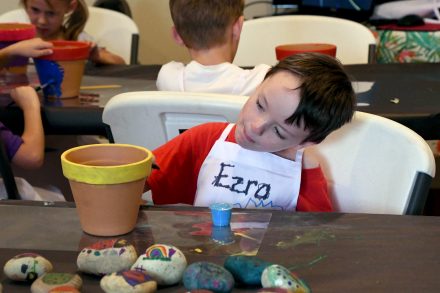 Ezra Adams paints his flowerpot on Wednesday morning, before planting flowers in it on Friday for his mom.

Sixteen kids have been having a blast this week at the Firehouse Arts Center Summer Art Camp.

The art camp was opened up to kindergarten through second graders for the first time and the kids are enjoying every minute of it.

Lead by Lynn Davis, the kids have focused on a variety of artists and completed paintings based off artists Jackson Pollock and Vasily Kandinsky.

Davis has introduced the kids to some art history, but she has most enjoyed opening their eyes to acrylic painting, which she said has been their favorite part. Davis knows they don’t get to paint on canvases at school, so this allows them to be as creative as they want.

“They love to paint anything,” she said. “We do more painting than anything.”

On Wednesday, the campers were painting acrylic flowerpots before planting a flower in them on Friday for their parents. They also were working on blowing paint to create a “germ” they would later stick googly eyes on.

The kids finish projects quickly, so Davis said they jump around and do a variety of things throughout the day. They take breaks and go on field trips and do more than one painting a day.

The campers also painted rocks to hide in the park. Henry Bryant, 6, painted a depiction of Spider Man, which was one of the favorites of the week.

Bryant has loved every part of the week from drawing to painting and can’t wait to take all his artwork home to show his parents.

While this camp focused on smaller, quicker projects for younger kids, there will also be a camp for third through sixth graders that will have more advanced work for young artists.

Creating a destination for cyclists