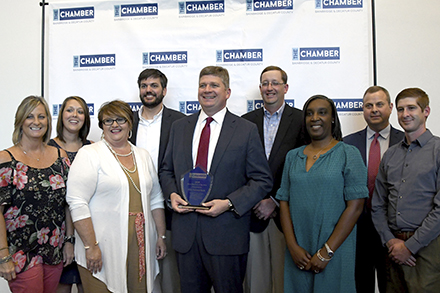 First National Bank President Brad Barber smiles with his team after they won Small Business of the Year at the Chamber Awards.

The first award given out was the Pilot Club Woman of the Year, which was given out by Pilot Club President Carolyn Thompson. The two nominees were Dr. Paula Chambers and Heather Thomas, who graciously gave their heart and time to serve others.

Dr. Chambers was then recognized as Woman of the Year.  Upon winning her award, Chambers said one thing she has learned is to be appreciative.

“We are often so caught up in our own destination and journey that we forget to appreciate the people along the way,” she said. “Appreciation is a wonderful feeling and it should never be overlooked.”

Chambers thanked her neighbor and remembered some of her friends who have passed away for their constant support and belief in her.

The second award was the Kiwanis Man of the Year, which was given out by Kiwanis Club President Shannon Key. This year’s nominees were Dee Humphrey, Sean Schuyler and Ronnie Burke, who have given their time and resources to improve the community.

Burke was announced Man of the Year and thanked everyone, but especially his family. He knows he has taken on multiple projects throughout the year and could not have done it without the support of his family. He also said he was continuing a legacy of his brothers, Bill and Dean Burke, who have continuously made strides in the community with their many involvements.

The award was given to Merreann McDonald, director of Bainbridge Salvation Army, which has provided thousands of dollars and meals during the hurricane. McDonald could not be there to accept the award due to the fact she was hosting volunteers to help send children off to camp with the Salvation Army, so Chairman Scott Ewing accepted the award on her behalf.

Landon Marzolf presented the award for Small Business of the Year. The nominees were First National Bank, Tri State Office Products and Smithco Recycling. All of the businesses provided a spotlight and contributed to the community, but First National Bank won.

President Brad Barber accepted the award on behalf of the staff.

“It is a privilege to be a part of this community,” he said.

T. Bridges presented the award for Large Business of the Year. The nominees were Metro Power, Shaw Industries, Southwest Georgia Farm Credit and Southwest Georgia Oil, each who was more than worthy of being named the winner.

The winner has become one of the largest homegrown businesses in Decatur County, although it only started with a $2,500 loan and one truck. The winner was Southwest Georgia Oil.

Glennie Bench accepted the award with some of her teammates from the Bainbridge location.

“It’s with great pride we accept this award,” Bench said. “That pride can only be eclipsed by the pride we feel about our community and the bright future that we share.”

The award was designed to highlight an emerging leader in the community.

The finalists were selected from 100 applicants and underwent a panel judging for further evaluation. However, Johnson came out the winner.

Johnson was thankful to everyone and was gracious to compete among such wonderful and intelligent people, he said.

“I love what I do on a daily basis and I think the Decatur County Schools are making the community a better place,” he said.

Randy Logue gave the final award to a leader who has made contributions in the community. The award went to chairman, Chris Hobby, who was responsible for the largest Rivertown Days ever thanks to his suggestion of bringing on headliner musician Colt Ford.

Hobby thanked everyone and the crowd was dismissed for a fun night of dueling pianos and dancing.