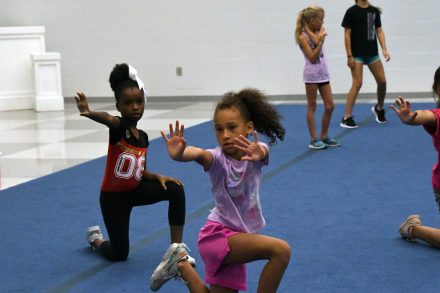 Left to right, Mikayla Lawrence and Amenti Jeffery throw their hands out while practicing their dance routine to show their parents at Wednesday’s sneak peak.

Vickers said during the week the girls learn a cheer, a dance and stunts. They then learn a 45 second routine that their parents will get a sneak peak of on Wednesday. Not only will the girls perform for their parents, they will open up for the competition showcase on August 10 outside of Bainbridge High School.

Vickers said some of the girls haven’t cheered before, but she sees their talent from dance and is excited to see them just enjoy the week.

Maeson Powell, 6, said she has not cheered before, but is most excited to start learning cheers. She said her favorite cheer is “C-A-T-S, Let’s goo Cats.” Powell said she can’t wait for her parents to see her and she knows they will be excited to see her singing the words. While Powell loves cheering, she is not too sure she is ready to be put in stunts. She said she is afraid of heights and doesn’t want to do that yet.

Mikayla Lawrence, 10, said she is also most excited to learn the cheers and dance. She knows her parents will be really proud of her when they come and see her. Like Powell, she is nervous to do stunts, but wants to learn to do a cartwheel.

“I’ve been asking my mama to put me in cheer, so I’m really excited to show her this,” Jakhria said.

Parents are welcome to come view the girls’ hard work on Wednesday at BHS, where they will display their new routine and some che