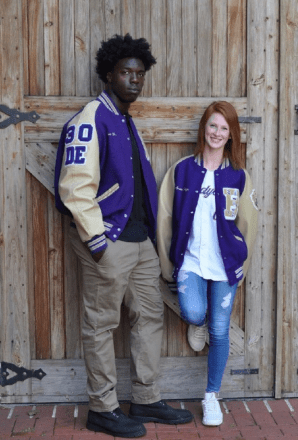 Roman Harrison and Mabry-Grace Briggs accomplished a lot during their Bainbridge athletic careers.

Mabry-Grace played on the Varsity fastpitch softball team for 4 years and was named First Team All-Region three of those years, Second Team All-Region one year and MVP two years consecutively.

During her Sophomore year, she was nominated for Positive Athlete GA.  Mabry-Grace will be playing softball at Gulf Coast State College in Panama City, FL where she received a full scholarship.

Roman has been a starter on the BHS football team for 4 years as a defensive end and a middle linebacker.  He was an integral part of the BHS State Championship team in the fall and his presence will be sorely missed.  Roman was a part of the Track and Field Team where he competed in the discus throw and the shot put event, placing in the region and state sectionals multiple times.

He was also a competitor on the BHS Weight Lifting Team and was named state champion this year in his weight class.  Roman will continue his football career where he earned a scholarship at the University of Tennessee.