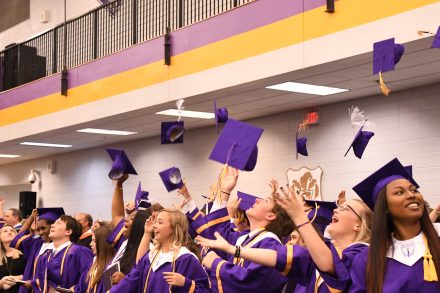 Lauren Howard, Nic Hodges, Scout Hixenbaugh and Mycha Harris were just a few of the honor graduates who threw their caps in the air in celebration of graduating Thursday night.

Thursday night the largest and most decorated class in Bainbridge High School history graduated while surrounded by friends, family and teachers who have supported them along the way.

The ceremony began with the processional led by Principal Roy Mathews, followed by Superintendent Tim Cochran and the other Board of Education members. Once all of the graduates were seated, Bradley Mitchell held a moment of quiet reflection. Jordan Davis led the Pledge of Allegiance, before turning it over to Sydnee Burke for the welcome.

Burke reflected on the accomplishments of the Class of 2019 and challenged each student to contemplate Proverbs 27:19.

She reminded her fellow students each day they will be faced with difficult decisions and the choices they make will influence their image and the perception of people around them. She questioned what kind of person do they see when they look in the mirror and when they look, is that the person they want to be?

“I believe in each of you sitting before me and have faith that the reflections of our hearts will make Decatur County and the world a better place,” Burke concluded.

Superintendent Cochran and School Board Chairman, Keith Lyle then presented two awards: The Mary Davis Pilot Club Award and the Earl Carl Gragg Award. The awards are chosen by the faculty and staff and are given to students who exemplify character, commitment and service.

The Mary Davis Pilot Club winner was Bailey Brock and the Earl Carl Gragg winner was Pratik Patel. Both students were given a round of applause for their outstanding achievement.

Brock gave the senior speech, where she spoke on how the Class of 2019 has endured multiple obstacles, but always persevered.

“When thinking back on all of the things that have defined our class, all I can say is ‘what can’t we do?’ What can’t this amazing senior class achieve when we put our minds to it? What can’t we overcome and make the best of?” she questioned.

Brock challenged the class to keep that same spirit of determination and competitive nature and put it in their mindset for the future.

“Continue to impress those who surround you with what you are capable of, like you have impressed the family and people here tonight by graduating,” she said. “Continue to strive for the impossible in whatever you may choose to do as we have done with our seemingly impossible football championship…”

She finished with reminding her class that they are the class who has beat all of the odds and there is nothing they can’t do when they put their mind to it.

Salutatorian, Benjamin Mitchell followed Brock with an address to his classmates.

Mitchell began by saying what an honor it was to be part of a class that has set the standard so high for years to come with their academic achievements and sports accolades.

However, he quickly reminded them that none of these achievements came easy.

“There were some routine and easy days, but more days than others were filled with obstacles and adversity,” he said. “Those were the days that separated a state champion and a state runner up in football.”

He told everyone that those tough days defined his or her character, though.

Mitchell spoke on his background as a center for the football team and the adversity they faced after the Hurricane, especially in their first game back against Warner Robins. He said the team felt sorry for themselves, but that set them up for failure, they needed to believe in the process and have faith in what they were doing.

He said that is not only a lesson he learned in the game, but about life as well.

“Believe in what you are investing your time, money, work, or practice into,” he said. “God will use your efforts and make them work in his time not your own.”

Mitchell continued to talk about the season and referred to the game against Stockbridge, where he thought the team’s run just might be over.

“When the odds are against you in whatever it is you are doing, never give up,” he assured his class. “Your personal portrait is not finished until God is done using you.”

Mitchell finished by saying this portrait that has been painted over the past four years is now done, but God is pulling out a blank one to begin painting the next and help the students be whoever they want to be. He reminded the class that their will be some stray marks, but in the end it’s the best that can be offered.

Valedictorian Pratik Patel finished the ceremony with a personal story of how he learned that being unique and being different was what made him special and he was thankful for being accepted into this class.

He told a story of how he was at the Dallas Airport when he was approached by two guards, asking what was in his bag; it turned out to be nothing more than shaving cream, but Patel was still baffled at what had happened. He realized it was because of his heritage as an Indian, though

However, Patel refused to be known as an Indian or an American he wanted to be Pratik and that is what he found himself being when he stepped into BHS for the first time. He thanked his teachers, family and friend, Manaj for helping him become the best version of Pratik that he could be. He reminded the class to always accept who they are and just be themselves and remind the world that they are “the Nasty 19 and will forever be the Nasty 19.”

His classmates cheered him on, before singing the Alma Mater and being presented as graduates by Principal Mathews and tossing their caps into the air.