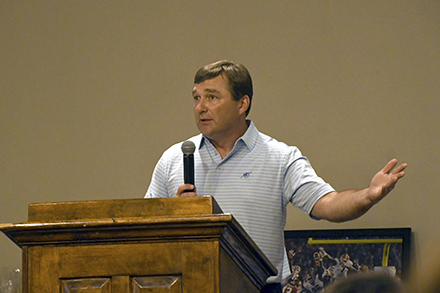 Despite the long line of people waiting to take their picture with Georgia football coach Kirby Smart, the Bainbridge native never once looked rushed.

Something about being back home, among the people who grew up with him and raised him, made Thursday evening’s Bainbridge football fundraiser at Bainbridge Country Club personal for Smart.

“I’ll be honest, I get asked to speak a lot, but I asked to speak at this event,” said Smart to Bainbridge coach Jeff Littleton during his speech in front of a packed banquet room. “You got me. You’ve been asking, but you got me now, because you put Bainbridge back on the map, put it where it’s supposed to be.”

Smart called Bainbridge’s 47-41 triple overtime win over Warner Robins in the Class AAAAA State Championship one of the best high school football games he’s ever seen. He wanted to do something for the team, both to celebrate the spectacular season and help raise funds for the Bearcat Touchdown Club.

He also wanted to return to his roots, the city that he calls home. When he arrived in Bainbridge Thursday, Smart spent a portion of the afternoon driving down memory lane. The home he grew up in. The Big Slough. Centennial Field. Potter Street and Conger Gym. The Earle May Boat Basin.

“All of these places that you leave, they never actually leave you,” said Smart. “They are my home. This is home to us, and that sticks to you forever.”

Smart spoke about his family, his rise in the ranks as a football coach, the importance of strong leadership and the building blocks of a championship program.

Bainbridge Touchdown Club Treasurer Connie Mitchell was thrilled with the turnout for the fundraiser event and applauded Smart’s inspirational message.

“To me it was really heartfelt,” said Mitchell. “There was a closeness. He is a phenomenal speaker. He truly wanted to spend the time that he spent with us.”

A live auction with items ranging from signed Georgia and Bainbridge helmets to shirts and hats capped off the evening. The money raised has not been totaled yet, but Mitchell was pleased.

“I feel like it was very worthwhile, the time and the energy that we have invested,” said Mitchell. “It allowed people to join in and be a part of it, and I feel certain that is has raised some funds that certainly will help replace what we spent last year. I think we are very much blessed with a great evening and the financial support that has come in.”

During a Q&A session with Smart, the coach was asked if he would ever leave Georgia for another job. Smart answered with a smile and asked, “Why would I leave home?”

The audience erupted with applause and cheers.

“I have more passion and energy in my heart for the University of Georgia than you’ll ever realize,” said Smart. “Because it did more for me than anything I’ve been to in my life. I had the great fortune of going. Probably would never have gotten there without some of the great people in this room. I assure you, it was what drove me to success.” 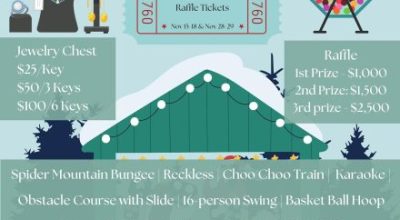