An international sight to be seen 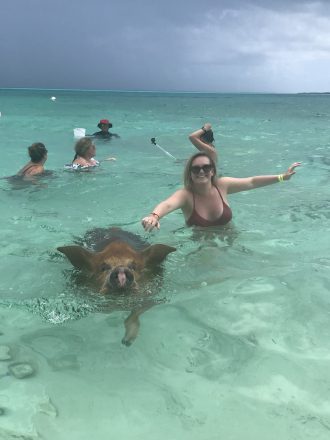 It’s been a while, readers. I’ve been busy traveling and celebrating brides to be, but I’m back with all my crazy antics to tell.

I most recently traveled with my family to the Bahamas, on my first international flight. It wouldn’t be a trip with my family without a couple of laughs and/or cringes, whichever way you look at it.

We arrived in Atlanta on Sunday night at the Kimpton Hotel for our early 8 a.m. departure. There were five of us, so imagine our surprise when we walked into a room with two single beds and a bathroom that had no door or privacy. We just burst into laughter and thought that could only be the beginning of the week to come. My dad snored the entire night, causing everyone to be irritated the next morning. No one was more ready for that 5 a.m. wake up call than me, so I could wake him up and tell him to stop.

We arrived at Cable Beach on Monday and were greeted with some Bahama Mamas. We then went out to the pool, where the festivities began. We stayed out lounging on the beach all afternoon, but we were supposed to attend a meet and greet that night. After too much sun, and maybe too many Bahama Mamas, myself, my sister and my cousin fell asleep and didn’t wake up until almost midnight. We missed the meet and greet and had to order in. They blamed it on me and said I turned off the alarm clock, which I did, but I didn’t want any interruptions after my dad ruined my sleep the night before.

The next day we went jet skiing and got to “island hop.” Our guides promised turtles and dolphin encounters, but I think they over-exaggerated; we only saw small jellyfish and the cruises in port. But, it was so fun. It reminded me of when I was little and my sister, cousin and I would all pile on with my dad, as he drove us out to the Point or the Cut in Mexico Beach on his jet ski.

The next day we did something my sister has waited her entire life to do. We went swimming with the pigs. They only bring out two at a time, but we met Pepper, Wilbur and lots of others. They enjoy pebble food and being fed hot dogs. The pigs in training just enjoy running around and disobeying, but they are babies. What else would they do?

That night we went to the casino, where I unfortunately lost all of my money. However, I did learn to play Blackjack, so at least I can say I acquired a skill.

On our final day, we just soaked up the sun and enjoyed one last sunset photo shoot. Then it was back to reality. While going through immigrations and customs in the Bahamas, an alarm went off. Having a water clogged ear, I couldn’t exactly hear what they were saying, so I quickly yelled “Did they say there’s a suspicious man?” I got the third degree from my entire family. They were upset I said that, when apparently it was not what was said and I need to pay more attention. I shrugged my shoulders and promptly took the worst customs picture one has ever seen and made sure everyone in my family’s was equally as bad.

All in all, it was a great trip, but there is no place like home and I have missed my own bed and roommate more than anything.

The cry of the Osprey