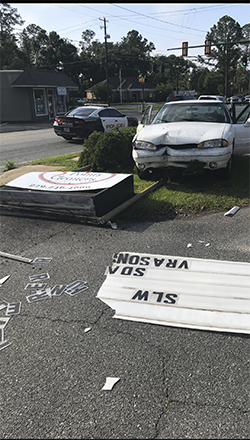 Ford was traveling east on College Street at a high rate of speed, when he attempted to turn left onto Scott Street. However, he was unable to maintain control and veered into the northbound lane before jumping the curb and crashing into the sign.

The sign has been around since the 1970s, 5 Points Cleaners owner Rick Ragan said.

“They don’t even make that size sign anymore,” he said.

Ragan had been putting up birthdays and anniversaries on the business sign for over 11 years. He said it had become a daily routine and he hates to see it go.

Ragan had a calendar of birthdays that was jam packed. He would transfer them over every year, so no one ever got left off. He knew the birthday sign was not necessary to the business, but he found joy in putting the names up.

“The joy of it is really in the afternoon,” Ragan said. “A mom would usually bring their kid by after school and they would stand under the birthday sign beaming from ear to ear. It made it fun to watch.”

Ragan said many people have asked what happened and some have reached out over social media. He has even had a grandmother call in her grandson’s name to put on the board, but at this time it cannot be restored.

Ford was arrested for driving while his license was suspended and failure to maintain lane.