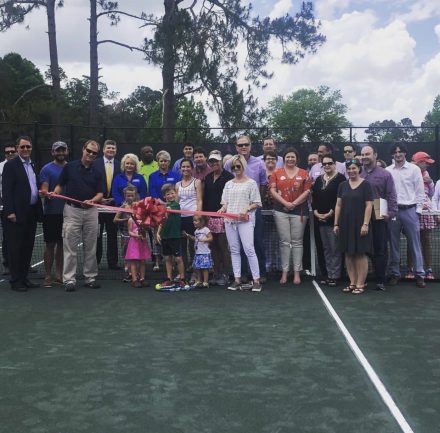 Thursday afternoon at the Bainbridge Decatur County Chamber of Commerce’s monthly chamber connect luncheon, Bainbridge County Club chairman Mike Harrell gave an update on the state of the club and the recent additions it has made.

Harrell began by discussing how in July 2017 the BCC was in a very humble stage. The membership had met that May to decide if they wanted to close the Country Club for good, however they chose to not close but to recapitalize.

In 2018 the Club had 57 investors and formed Bainbridge Country Club LLC, which is now 13 months old and thriving.

“At our low point we had 118 members at that meeting to discuss our closing and today we have 177 members,” Harrell said.

Harrell’s ultimate goal before stepping down as the first chairman is to have 185 new members. He will then focus on recruitment and bringing in new members.

The club has several types of memberships for newcomers to choose from. They can choose a golf membership, a social membership or a junior membership.

“A junior membership is becoming the most popular membership for people under 35 years old, at only $50 a month,” he explained.

They are also working on developing a corporate membership that can be tweaked to serve smaller businesses as well.

Harrell wants people to know that although at one time things looked dim, the Bainbridge Country Club is alive and well.

“There’s something bright out there and we are feeling it here at the Country Club,” he said.

The Club lost hundreds of trees during Hurricane Michael, but since then they have cleared, burned and scraped trees and debris to bring the golf course back to life.

“It’s playable and very nice and I hope people are seeing the effects of the work we have put out there,” Harrell said.

Harrell said they have ordered 12 new golf carts with the growing demand and hope to have 38 by the end of the year. They have also purchased a new golf cart shed to house the carts, due to the extensive damage of the one hit during Michael.

However, Harrell said this is a good problem to have. The play is indicative that we need more carts, he said. It’s a good thing to run out of carts he pointed out.

The biggest change is the installation of three new clay tennis courts.

This is huge bonus for our tennis community and Harrell was proud of them and was willing to demonstrate how to line the courts and brush up on them.

He invited everyone to also check out the new pro shop and join him out on the court for the ribbon cutting of the new and improved BCC.

BHS junior earns opportunity of a lifetime as first…