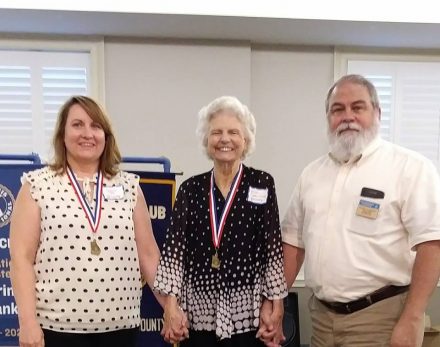 Friday evening at the Kiwanis Club Governor’s Rally in Leesburg, two Bainbridge Kiwanis Club members were awarded for their contributions to the club and outstanding leadership and dedication.

Kiwanis Club President, Shannon Key and members Jean Givens and Frank Flowers were all in attendance. The event is designed to allow clubs and the Georgia District Governor, Debra Brilling, discuss what the clubs are doing in the community and how they are actively engaging the community with the current club members.

Once Brilling had individual discussions and updates she awarded the various clubs patches and individual awards. The Bainbridge Kiwanis Club received a patch for supporting six out of six district projects and also donated $200 as a gift to the Children’s Fund in the governor’s honor.

Brilling then awarded Key and Givens.

Lieutenant Governor, Ken Rodd, nominated both ladies. Rodd said there are 10 clubs in the division and each year he looks through all of them to see which club has made the largest difference and this year Bainbridge stood out.

“Shannon is a great leader and has initiated many things this year,” Rodd said. “She has completed a membership drive and helped organize a beauty pageant in addition to the required projects of her.”

Givens also stood out to Rodd and was awarded with the Service Leadership Medallion.

“Givens is very supportive,” he said. “She attends just about everything and participates. You can always count on her being there.”

Givens’ award is only given to a few people every year, so it was quite an honor, Rodd said.