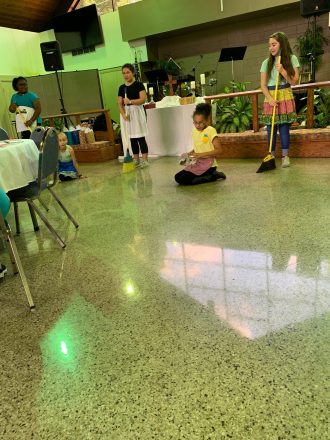 Five youth from Misty Barber Tice’s afterschool theater class came to the First United Methodist Church Wednesday noon to perform a short program titled a Broadway Review. They sang two numbers they are preparing for the full Broadway Showcase performance that will be held Monday, May 20 at 5:30 p.m. at Grace Christian Academy.

Abigail Brown, Bennett Earnest, Lollie Gay, Isabella Rentz and Madelyn Williams sang and acted out ‘It’s a Hard Knock Life’ from Annie and ‘There’s No Business like Show Business’ from Annie Get Your Gun for the church Keenagers, a group that meets for lunch and program once a month.

Since coming back home from Atlanta, where Tice was very active in theatre, she has become quite busy fulfilling her goal of offering theatre classes locally, something she missed growing up in Bainbridge.

Tice began teaching theatre as an after school activity in January at Grace Christian Academy on Monday afternoons. Although the classes are given at GCA, they have been open to youth from all schools.

She recently helped with the Bainbridge High School production of ‘High School Musical Jr.’; and is helping prepare a musical dinner theatre production of ‘Rock Around the Block’ to be presented at GCA May 14 at 6 p.m. That show and the entire evening will boast a 1950’s theme as a fundraiser for GCA Bloom.

She will also present a weeklong youth day camp for drama this summer at a time yet to be determined.

“I really did not expect to be this busy,” she stated with a big smile, indicating she is very happy to be sharing her knowledge and experience with local youth.