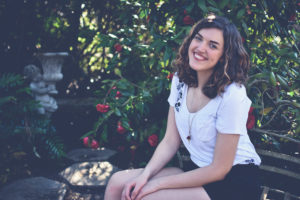 Pleiades congratulates Aleyna Rentz, who has won the R.M. Kinder Award for Realistic Fiction for her story, “Cottonmouth”. She will receive $1,000 and publication in the Winter 2020 issue of Pleiades.

Here’s what R.M. Kinder had to say about her winning story:

“There’s much to praise about Aleyna Rentz’ ‘Cottonmouth,’ particularly the tasteful treatment of the subject.  The story helps explain reluctance to testify, doubt of memory, the longing just for acknowledgement if not apology and justice. Fictional techniques all establish a recognizable, real and modern world—common dialog, relationships, scenes–but narrow to the aftermath of abuse in the life of one person. Nothing prurient, overly dramatic or extraneous. The point of view—first person, young college student Shelby—is especially effective.  It reveals the dichotomy of Shelby’s thoughts and actions, her self-view, and the view others have of her—a world of personal conflicts. It allows the telescoping of time, and the highlighting of the few events and images of import to Shelby, and the unconscious connection of her dreams.

Every detail, however normal, matters to her, and to our understanding of her situation. A simple wave of the hand in one passage is a wrenching, if momentary, defeat. Shelby, who is an enigma at the beginning of her story, rounds fully, is a survivor, a fierce fighter, someone to admire and champion.  “Cottonmouth” is an unsettling story, but especially relevant to our understanding “MeToo” and similar movements.  It is also lovely work.” -R.M. Kinder

Aleyna Rentz is a fiction writer from rural Southwest Georgia, where she grew up with her six brothers and sisters. She now lives in Baltimore, where she is pursuing an MFA in creative writing at Johns Hopkins University.