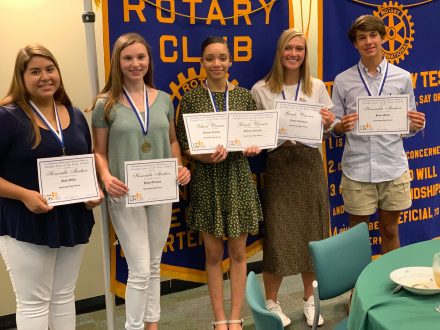 A program Rotarians look forward to each year is hearing from some of the high school students who have written essays on subjects that are close to their hearts.  Called Laws of Life, Rotarian and former BHS Principal, Tommie Howell, who began the program at BHS years ago, introduced Heidi Chambers, chair of the English Department. She, in turn gave a brief history of the program and introduced the speakers.

First up was 9th grader Brent Miller, who titled his essay, “Chickens. Dead or Alive?”

His maxim was, “You just gotta keep on going,” and have determination.

He spoke of how his seven chickens (Jackie Chan, Cluck Norris, Velma and Louise, Chicken Little, Joker and Big Bird) were two and half weeks old when Hurricane Michael tore through, and how he worked to keep them safe in a plastic tote brooder box in the garage. After the storm he was eager to get to the garage and was relieved  to hear the “jubilant” sounds of chickens fluttering around in their makeshift box.

He and his father then fixed up the chicken coop, made sure it was supplied with food and water and went on with his life. He made sure the chicken wire surrounding the coop was intact. Then one day he checked the chickens only to find them gone. Studying the latched door he soon realized that a red fox had maneuvered its way beneath the door and into the coop. He was feeling overwhelmed and wondering what to do next when he remembered the saying from the famous artist Post Malone who said, “You just gotta keep going.”

So, he ordered new chickens, repaired the coop to be as secure as Fort Knox. Now he has ten chickens and has installed a field camera to guard the coop, and yes, the demon has returned several times but to no avail. Raising chickens has taught him the true meaning of the phrase, “fox in the hen house,” as well as responsibility and determination. Do not quit—just keep going.

Another ninth grader, Paige Overman, wrote on the maxim: “People say you never know what you got till it’s gone.” As a young child she relied on the older people in the house. Being the third child of four, she always looked to her older brother and sister for help and entertainment. Then her sister was a speaker at high school graduation and was leaving for college. It was then she realized how young she was and all the childish things she did. She could no longer lean on anyone. She had to begin her own life. “I never realized how much she did for me, or maybe I did but I never thought she would leave.”

Dianna Silva spoke about appreciation and a special shout-out to immigrant parents who came here with nothing; but gave us everything. An 11th grade student, Dianna relayed the struggle her parents had when they came to America from their hometown of Mexico. They were tired of their poverty-stricken lives. They wanted a better life for their family and worked hard to achieve the American dream to give their children things they never had as a child. They both worked long hours and struggled to teach the children simple English words, in spite of the fact they spoke few of them.  They wanted the children to have something they had never had as a child. In eighth grade, Dianna was awarded valedictorian of her class, making her parents very proud. She greatly appreciates her parents for working hard for her to have a better life, and in turn she works hard to make them proud.

12th grade student, Emily Chambers spoke on the maxim, “Do you know the value of three dollars?” or “The price of a Coconut.”

She and her friend were traveling in the Dominican Republic with GG, her maternal great-grandmother and her grandmother. They were just leaving the beach after swimming with the dolphins, when they saw a native selling coconuts. They ran over and gave him $3 and watched him cut the top off then put a straw in it. They were eager to try something new and each took a huge gulp, only to discover it was awful.

On the bus ride back she attempted to throw it out the window, but GG stopped her in her tracks. I had just wasted not only the fruit, but also three whole dollars. She accused me of being ungrateful and spoiled. Emily remembers the stories told by her GG of how the family had come to America from Scotland, passing through Ellis Island and how they lost everything in the great depression.

“It took me a long time to realize how much I take her for granted. I’ve always thought of her being a big part in my life, but what I should’ve been thinking about is what little part of her life I was in. She had lived 80 years before I came along. Looking back, “I realize my great grandmother is my three dollars.”

The last student to speak was Mikayla Kincaid who spoke on the subject of “Me” and her struggle with insecurity, anxiety and depression. Her maxim was “The only person you are destined to become is—the person you decide to be.” By Ralph Waldo Emerson.

She tells of worrying about what other people were thinking about her, and how she stopped talking to people generally, because of being afraid of what they would think of her. Her freshman year was when the rough times really began. The transition from middle school to high school was “Like a slap in the face.”

“I was letting people’s opinions shape me. I wanted to blend in and become part of the crowd.” Then she began to make some new friends, mostly upper classmen. She was becoming social and able to communicate well and they told her everyone should be able to be themselves and be unique in their own way.  She took their advice and began to not worry about others opinions. Her anxiety and depression settled down. “I was not going to let my past control who I was and who I am going to be. I decide who I am and destined to be.”