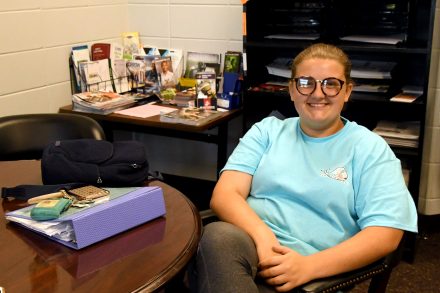 Blocker is a junior at Bainbridge High School and was recently accepted into the Congress Bendestag Youth Exchange Program, where 250 American students and 285 German students exchange places for a school year. Blocker will be the first BHS student to participate in the program.

The program is state funded and based on a full scholarship. Blocker said she will pay approximately $3,000 to stay for the entire year, including airfare and other necessities.

Blocker was not always planning to attend the Youth Exchange Program. This past summer Blocker attended the Congress of Future Medical Leaders and Physicians in Boston. She flew there alone and stayed for four days and flew back.

“After doing that, I realized I really like to be independent and was already researching where I could go next and learn more,” Blocker said.

Blocker originally was hoping to study abroad in Vietnam for two weeks and learn about medicine, but it was too expensive. That is when Google Search suggested Congress Bendestag she said.

Blocker applied, but knew the opportunities were slim, considering only 250 people from across the United States are accepted. Blocker made it to semi-final interviews and traveled to Atlanta, where the woman who makes the final decision for the East Coast interviewed her. Blocker was then placed in a group setting, where she was watched to see how she interacted with others of different cultures and backgrounds. After completing the semi- final interview, Blocker was selected as a finalist and is now going through the process of finding a host family in Germany.

Blocker realizes that her host family may not speak any English at all, so she is quickly perfecting her German through self-teaching on Rosetta Stone.

Blocker will be placed in a grade in the German school based on how far along she is in the language. She will primarily take German academics, however she is unsure if they will count as class credits in the states. Blocker is not worried though, because she has completed all of her senior class credits, with the exception of one science course, which the Department of State is working to try and convert into one of the German classes.

Blocker has already been in contact with some of the alumni of the program to prepare her. She said she has learned that the most difficult part is the language barrier, because if you don’t know it well you are unable to communicate in school and with the host family. She also knows leaving her family for a year will be difficult, but she hopes to have them visit during the second semester family visitation day.

Blocker knows this will be a test of what she wants to do for the future. She hopes to go into the Air Force and provide medicine in foreign countries. This will be her first immersion into a foreign culture, but she is confident she will love it and be accepting of everything she comes across.

Blocker finished by saying this is something she never thought she could do when she saw the statistics.

“It’s crazy that me, this little small town girl got into something so big,” she said.